By Anonymous User on July 25, 2015 in Example Models, Projects

Two of these Micro-Trains N scale cabooses have been in my collection since Micro-Trains was part of Kadee.   This body style is a fairly accurate representation of a Southern Pacific C-30-1 wooden caboose.  The third car is a newer release.  It is factory decorated for one-time SP subsidiary Texas & New Orleans. 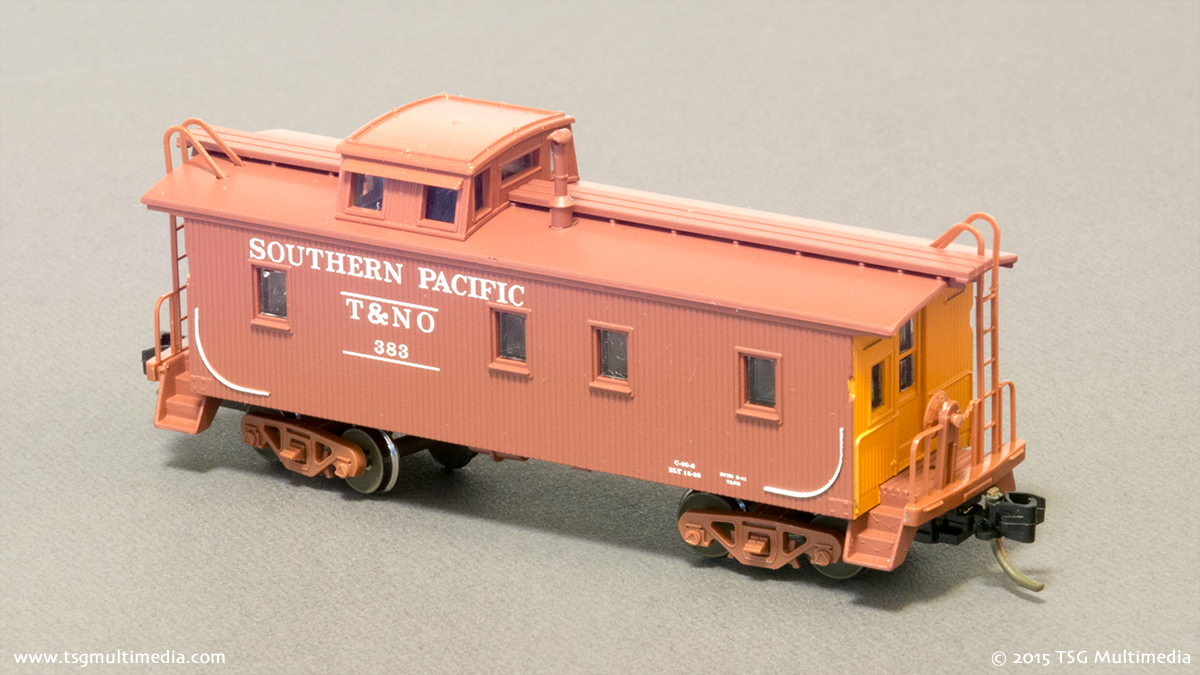 My two older cars were originally decorated for Southern Pacific.  I repainted them into a fictitious railroad scheme some years ago.  They remained that way for quite a few years.  I ran across them again more recently and decided to change them back to Southern Pacific.

I started by disassembling the two older cars.  I had used Microscale Micro Kristal Klear to make windows.  It took some effort to remove that.   I stripped the old paint off the cars by giving them a bath in Scalecoat paint remover.  Once the paint was removed I washed the parts in soapy water and set the shells aside to dry.

One of my cars had damaged end handrails.  Fortunately Micro-Trains sells replacement parts for these.  These parts are made of a slippery plastic that does not take paint well.  Before painting I used my Badger hobby sandblaster to dull down the shiny plastic surface.  I’ve found that doing this greatly improves paint adhesion on this type of plastic.  I washed these parts to get rid of any residue from the sandblasting. 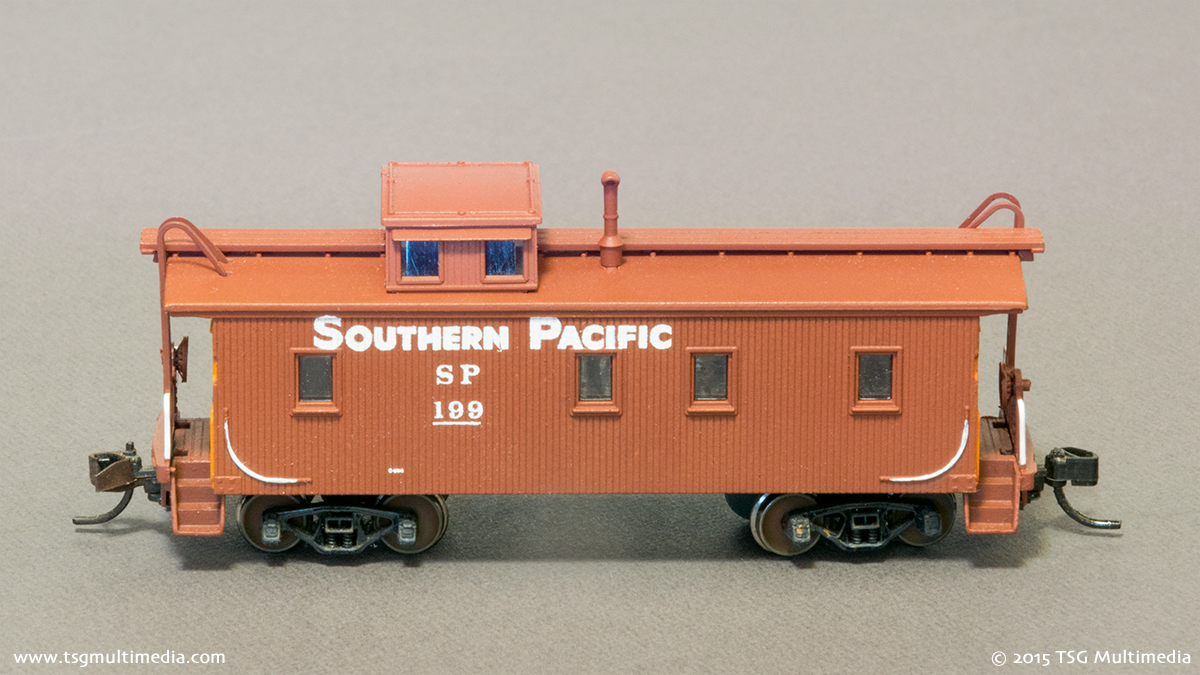 When all the parts were dry I painted everything with a primer coat.  I use either flat white or a very pale gray for this.  Either will work.  I airbrushed the ends of the Micro-Trains cabooses with SP orange (probably Scalecoat but I honestly don’t remember).  After the orange was dry I masked the ends.  I sprayed the shells and handrails with boxcar red.

When the paint was dry I airbrushed a clear gloss coat on the shells.  I used Microscale decals for the Southern Pacific markings.  I use Micro-Set (blue label) to position the decals.  Once they are in place I use Micro-Sol (red label) to soften them and make them conform to the paint.  If I see any bubbles or silvering I use a sharp hobby knife to poke holes in the decal and apply more Micro-Sol.  I keep doing this until the decal is fully adhered to the surface.

I decorated caboose 199 in the SP Gothic lettering style.  SP 741 got the more traditional Roman-style lettering.  Both were done following prototype photos. 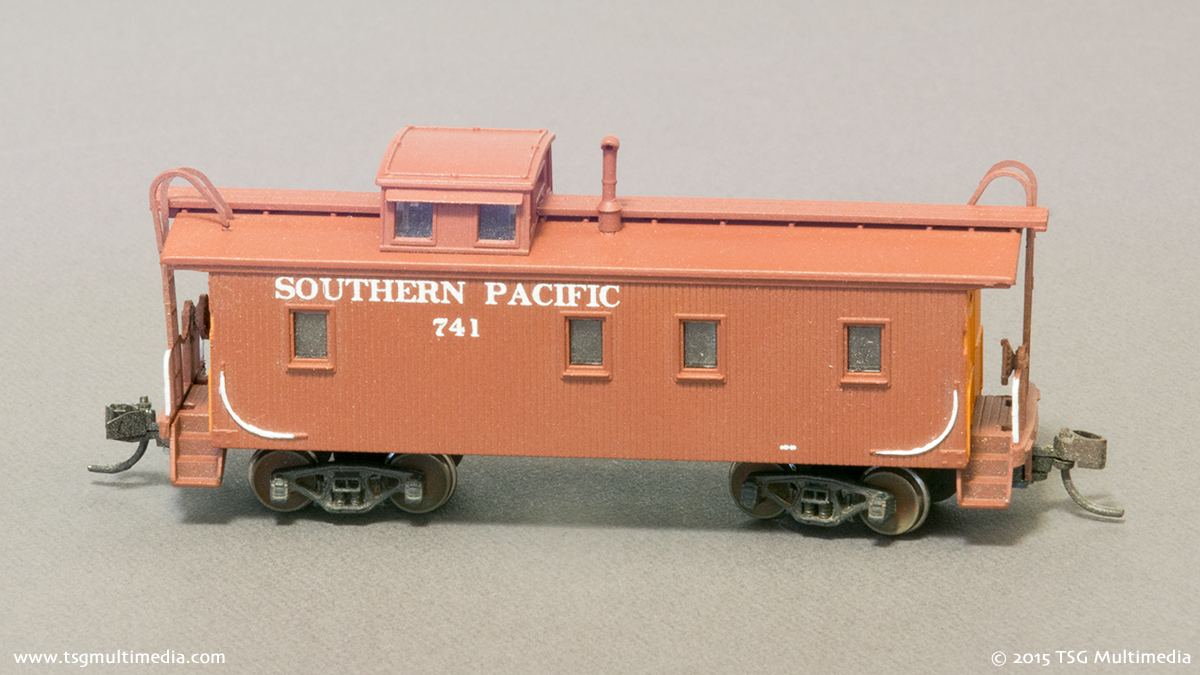 After I was satisfied with the decals I sprayed the shells with a clear matte finish.  I have not weathered these cars yet but the matte finish will provide a good base for doing that in the future.  I installed Micro-Trains window kits in both of my older cars and added a bit of weight before reassembling them.  The weight helps to keep the coupler springs taut in a train.

All three Micro-Trains cabooses ride on Fox Valley metal wheels.  I prefer metal wheels to the point where I will not allow plastic wheels on my track.  Plastic wheels seem to make the track get dirty faster.