By Anonymous User on July 22, 2015 in Example Models, Projects

CSX SD70MAC 775 is an N scale Kato model that I patched to represent a former Conrail unit.  Patched locomotives are commonplace on modern railroads.  A patch can be applied quickly to change a locomotive’s reporting marks and number.  Eventually the unit may be repainted into the new owner’s colors.  However patched locomotives often run for years in their old railroad’s livery.

My CSX SD70MAC started as a stock Kato model painted for Conrail.  I started by disassembling the shell and removing the window glazing.  I got rid of the original numbers by gently rubbing them with a micro brush soaked in paint stripper.  I have to be careful when doing this not to remove the underlying paint.  I also removed the number board inserts and sanded them to erase the original numbers.

I masked the cab roof and airbrushed it flat white to match prototype photos.  Next I airbrushed the shell and brush painted the number boards with clear gloss.  This provides a good base for decals. 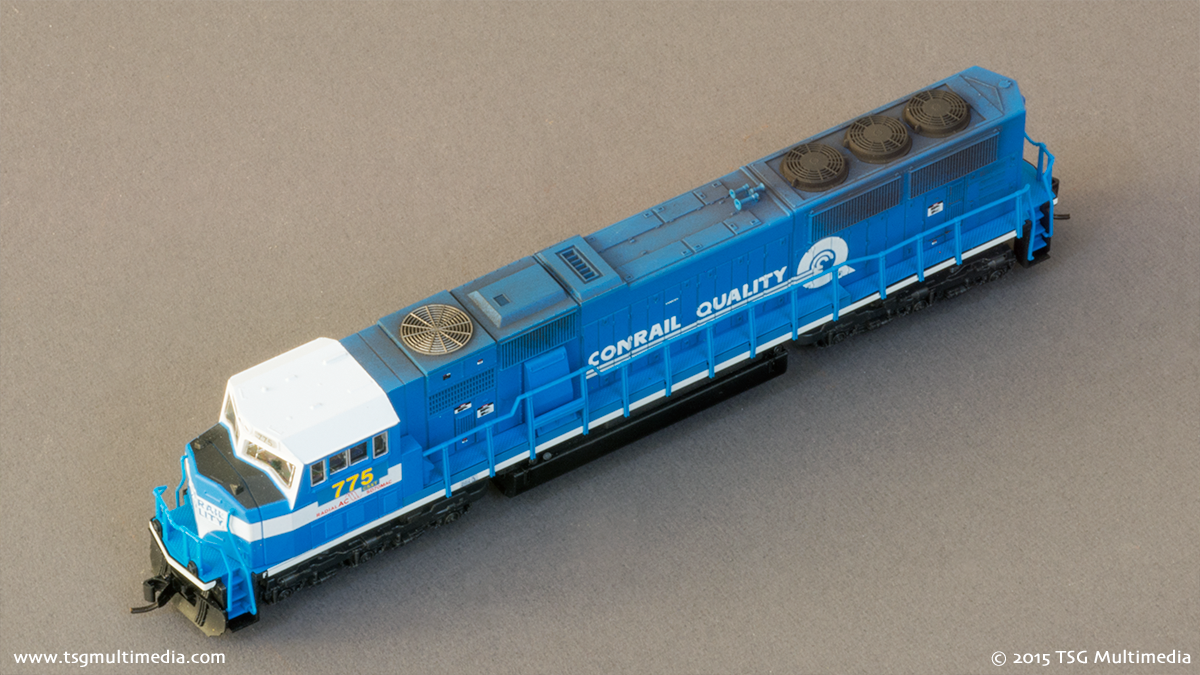 Microscale sells a decal sheet for patched CSX diesels that was just the thing for this CSX SD70MAC.  The blue rectangles under the cab were applied first.  Since these completely cover the space where the original numbers were, some people might wonder why I bothered to remove them first.  The reason is that the factory numbers have thickness and the outlines will show up under the patch decal.  I didn’t want that.

When applying decals I use Micro-Set (blue label) to position the decals.  Once they’re where I want them, I use Micro-Sol (red label) to soften them and make them sink down into the paint.  I hold the model up to the light to see if there is any decal silvering.  If necessary I poke any air bubbles with the tip of a sharp hobby knife and apply more Micro-Sol.  I keep repeating that process until the decal film disappears.

After the decal work was finished I sprayed the shell with a clear matte finish.  This provides a good base for weathering.  I put the window glazing and number boards back into the cab and then reassembled the shell.

My CSX SD70MAC is equipped with a Digitrax DCC decoder.  It does not have sound.