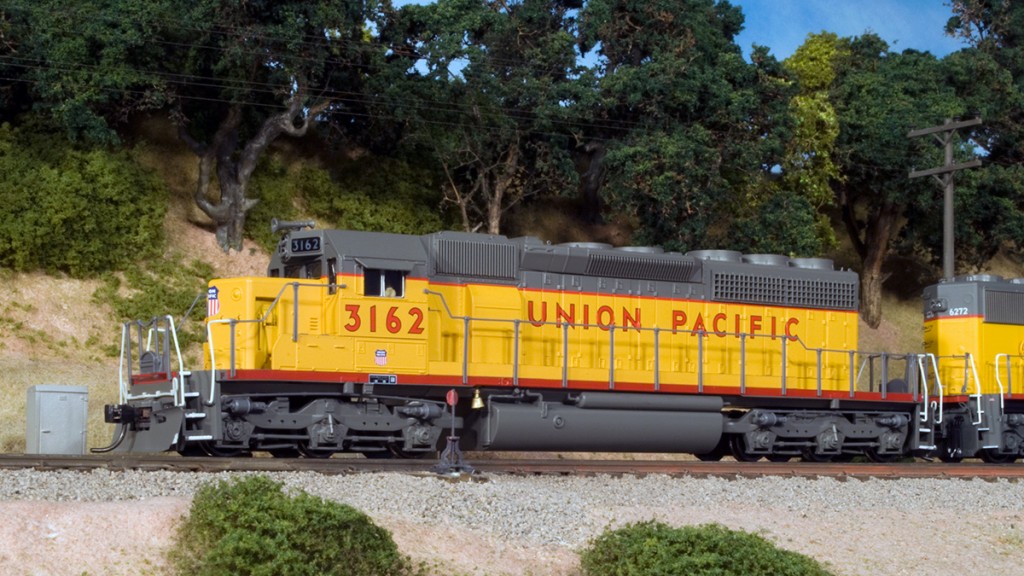 The BlueLine locomotives are really targeted at modelers using DC power who want sound, but they have an 8-pin DCC plug and can be equipped with decoder. I cover how to do that on the DVD.

Only common CVs or those that were changed from their default values are listed. Since I chose not to keep this locomotive, I left most of the settings at their defaults.

I have to confess that I am not terribly impressed with this locomotive.  The detail is crude compared to modern Athearn or Kato SD40-2s, it doesn’t run as well, and the sound system is not as good as some others. Having to use a separate decoder for motor control makes programming difficult.  BlueLine locomotives are a little cheaper than their QSI-equipped counterparts from BLI, but when you add in the cost of a motor decoder, plus the hassle of installation and programming, you really aren’t saving anything.

I really did not like the factory electronics in this locomotive.  Even on DC, the locomotive was awkward to run.  Like any sound-equipped unit on DC, it takes quite a bit of throttle just to get it going. Beyond that, though, it seemed to respond to throttle commands when it felt like it.  I advanced my DC throttle and the locomotive just sat there.  Eventually it would move.  Stopping was just as difficult to control.

The Digitrax DH163-series decoders are overall pretty good, and the locomotive ran better and more predictably on DCC.  Unfortunately, after I’d installed the decoder and ran it for a few days and everything seemed fine, the decoder spontaneously fried.  I’ve never had a Digitrax decoder do that before, so I suspect the BlueLine electronics.  Usually if a decoder fails it does it immediately because something wasn’t connected properly, but in this case it was a simple plug-in install, and I checked it carefully to make sure that all the pins were in the right holes.