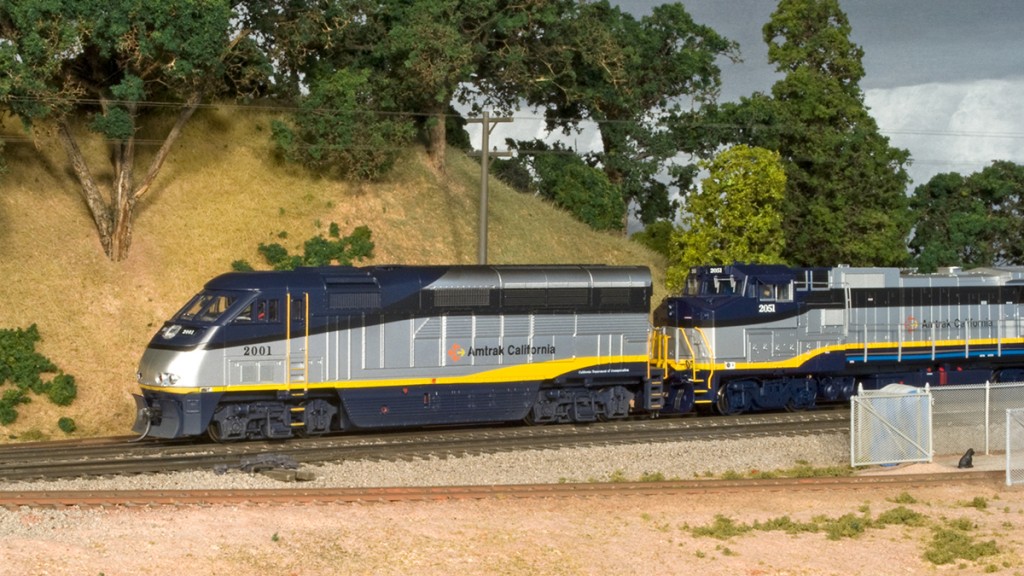 Though technically a part of Athearn’s “Ready-to-Roll” line, the F59PHI really has more in common mechanically with the older “blue box” models. As such, I thought it would be a good candidate for the Digitrax DH163AT decoder. This decoder features a special clip-in harness that eliminates the need for soldering.

Living in the San Francisco Bay Area I have seen Amtrak California’s F59PHI locomotives many times. I certainly saw plenty of them the day we filmed A Day at Pinole!  My model is decorated in the as-delivered version of the Amtrak California scheme.  This paint scheme is slightly different from the modern version.

Most of the detailing on this model was limited to the back end.  I added free-standing grab irons, an uncoupling lever, MU hoses, and a few other small parts.  I substituted NWSL wheels for the originals, as the nickel-silver wheels conduct electricity better.  I also gave the model some light weathering.

Since this locomotive has the old-style Athearn motor and spline shafts, it is a bit noisier than Athearn’s newer hex-drive models.  In spite of that it runs smoothly.  This locomotive has a very heavy frame, so it should be a good puller (not that Amtrak California’s F59PHIs usually handle more than 5 coaches at a time).  The frame design makes working on the locomotive a little bit difficult, as access to the drivetrain area is restricted.

The DH163AT is a good running decoder and pretty easy to set up and program.  If you have a “blue box” Athearn unit and just don’t want to have to solder, the harness makes it relatively easy to add DCC.

Using this installation is somewhat limited, though.  For example, the harness is designed to work with the stock headlight, but that’s just a single bulb in the front of the unit.  To really look right a locomotive like this one needs working ditch lights, red marker lights for running in reverse, etc. Fortunately the DH163 has six light outputs, so you could always go back and redo the lighting later.  I eventually did this in my model.