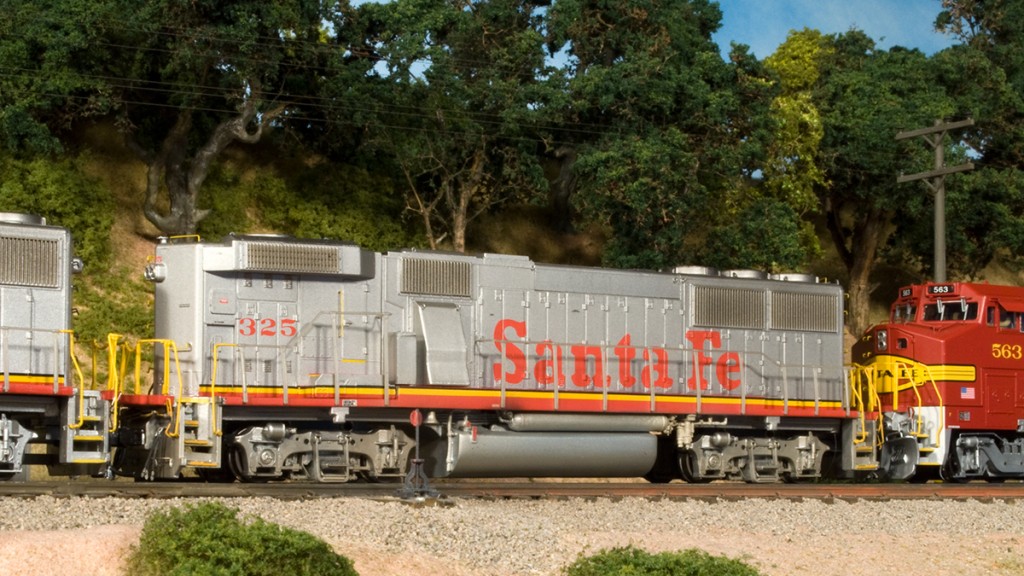 Overview
The Athearn GP60B a great model of a locomotive unique to Santa Fe and BNSF, a smooth running model with good detail.  Like most modern Athearn locomotives, the GP60B has a light board with a built-in JST connector.  On the DVD I show how easy it is to use this connector to install a decoder, in this case a Lenz Gold JST.

CV Programming – Lenz Gold JST
Only common CVs or those that were changed from their default values are listed.  Some settings reflect my personal preferences for speed matching and performance.  The Lenz Gold has a very good BEMF implementation, and I left the values at their defaults.

One thing I found with this model was that even though it was an easy plug-in install, and the JST plug can only be connected one way, the locomotive ran opposite from the normal direction of travel when I put it on the track. I had to use CV29 to correct this.

I did add some detail to this model, mostly on the underside.  The model had good detail on the top of the shell but the area around the trucks and fuel tanks looked a little naked.  I cut off the cast-on air reservoirs and replaced them with parts from Details West.  I used a complete Details West No. 331 GP60 detail kit, which includes a lot of the plumbing below the deck.  It was a bit of work to install, but I think the results are worth it, especially on a silver model where all the details show.  I also added uncoupling levers, MU hoses, lift rings, and a few other parts.  A little light weathering helped to get rid of the toy-like look of the bright silver factory paint.

Athearn has done a good job with its “Ready-to-Roll” line, producing locomotives that look good and run well. T he new hex-drive is an improvement over the older spline shafts used in “blue box” locomotives.  The motor is a bit noisier than motors in Atlas or Kato units, but its still pretty quiet and mine got quieter with some run time.  The shells do lack some detail as I mentioned above, especially below walkway level, but thankfully this is an easy thing to fix with some added details.  I also give kudos to Athearn for being willing to produce models like the GP60B that were unique to a single railroad, and for making models with prototype-specific details.

The Lenz Gold and Silver series decoders are some of the best I’ve ever used, capable of extremely smooth running.  If you want to pick a good overall decoder and don’t care about sound, the Lenz Gold or Silver series is a good choice.  The Silver series offers the same performance as the Gold, it just lacks a couple of extra features that most people might never use anyway.  I like these decoders because it’s possible to get great smooth running without excessive CV tweaking.  They run well right out of the box.