The Atlas Classic C424 is a great running model with good detail right out of the box.  The newer versions of this model have free-standing grab irons and other detail refinements.  Atlas had an earlier version of this model built by Kato that had molded-on grabs.  My example is one of the newer ones.

This particular C424 is one of the early production versions with the protruding overhangs on the end of the long hood.  My model came decorated for Erie Lackawanna.  Some of these locomotives were used by Conrail in the late 1970s and early 1980s.

As is often the case with mergers, locomotives from predecessor roads are often “patched” with a new number and reporting marks.  Patching is sometimes followed by a complete repaint.  In other cases the locomotives are retired in their original colors.  I wanted to tackle at least one patched locomotive for this project, and this little C424 intrigued me.

While this model was generally correct for a former EL Conrail C424, there were some things that needed to be changed.  I removed the factory air horn and replaced it with a pair of single-chime horns.  One of these is mounted on a custom fabricated bracket on the front of the cab.  I even modeled the air line that powers the horn.

I fabricated another bracket for the antenna on the roof since I could not find any commercial part that was suitable.  I show how I did this in the program. 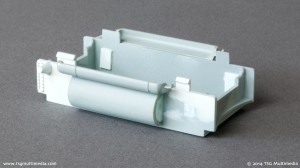 Another area that needed attention was the fuel tank.  The semi-cylindrical bulges on the side of the tank were shorter on the EL units than on the tank that comes stock with the Atlas model.  I show how I built a new fuel tank from Atlas parts.

As with the Canadian Pacific C630M, I wanted to make the class lights independently operable.  This was slightly more complicated on this model since there were also class lights on the rear.  The model only had circles to indicate where the rear class lights were positioned.  There were no lights there at all, so I had to drill holes and fabricate my own from fiber optics.  As with the other models, I also made the number boards operate independently.

The Atlas C424 model has no provision for sound.  I show how I added a speaker and enclosure.

I also added other small details, including a speed recorder and other cabling on the trucks.

Before I could patch the locomotive for Conrail I first had to remove the Erie Lackawanna name and road number.  In the program I show how to do this without doing damage to the underlying paint.  I applied a new Conrail number and “CR” stencil using Microscale decals.  I had to redo the number boards as well.

I was not able to find a large number of photos of these units in Conrail service.  The photos I did find showed that these locomotives were allowed to become very dirty.  I tried to reproduce the look I saw in the photos.  This is a locomotive running out its last miles before being retired.

For the run-by shots of CR 2475 at the end of the chapter, I paired my C424 with the Conrail SD40 that I built for HO DCC Installs Volume 1.