Bowser’s Montreal Locomotive Works (Alco) C630M is overall a nicely detailed model and captures the look of its Canadian prototype.  Both Canadian National and Canadian Pacific used these units, along with British Columbia Rail, Cape Breton & Central Nova Scotia, and a few others.

I selected a Canadian Pacific unit because I found photos of CP C630M locomotives operating into the early 1990s.  I have no evidence that any of these made it out to the west coast of the US in the 1990s.  From the photos I gathered most of them seemed to operate in eastern Canada and in certain parts of the northeastern US.  Still, I figured it is at least remotely possible that I could use a unit as pool power in one of my trains.

Though in general the detail on this model is good, the headlights and ditch lights are very badly done.  The lenses are simply way too large.  The headlight casting and lenses are actually a single part molded in clear plastic with paint around the edges to simulate the light housing.  In the program I show how to replace the headlight with a much better aftermarket part and illuminate it with scale-sized fiber optic lenses.  I gave the backup light and ditch lights the same treatment.

I also spent a lot of time reworking the number boards and class lights.  Like a lot of engines of Alco design, these units had three separate class lights on each side of the cab.  I wanted to be able to light up each pair of lights, red, green and amber, separately.  I also wanted the number boards to be independent.  This required quite a bit of work inside the model to accomplish.

Canadian Pacific C630M 4507 had wheel slip controls on each axle with cables on the fireman’s side.  Bowser provides the parts to change out the journal boxes with the model, but the cabling has to be fabricated.  I cover this in the program.

I also show how I fabricated a support for an MU connector that spans two of the handrail stanchions on both ends of the locomotive.

By the 1990s these locomotives were looking a bit tired, and I weathered the unit following photos.  I show how to reproduce fading paint in the center of the unit near the prime mover as well as add plenty of road dust along the bottom and exhaust stains on the roof. 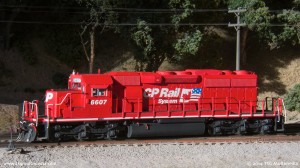 Since I had no other Canadian Pacific power when I started this project, I built a Canadian Pacific SD40-2 in the “flag” scheme so that I could have a trailing unit for the run-by shots at the end of the chapter.  The SD40-2 was built from an Athearn “blue box” model.  I added a ton of details, a can motor, and installed an ESU LokSound Select DCC sound decoder.  I painted the model CP red and used Microscale decals for the markings.  CP 6607 represents a former SOO line unit.  Because these units had been recently repainted in the early 1990s, I left it fairly clean.

For the run by shots I set up these two units with a long train of Intermountain Canadian cylindrical grain hoppers in Canadian Pacific, Canadian National, Canadian Wheat Board, Alberta Heritage, and Saskatchewan markings.