Athearn Genesis F-units have a well-deserved reputation for being one of the best models of these locomotives.  They are exquisitely detailed out of the box and generally run well.  The FP7 version is no exception.  The FP7 was designed for passenger service, and was four feet longer than a standard F7 to accommodate a steam generator. 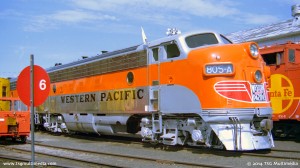 I had a particular attachment to WP 805-A, since I have seen this locomotive several times during visits to the Western Pacific Railroad Museum in Portola, California.  This was one of the locomotives that pulled the famous California Zephyr.

Since this locomotive was already very accurately detailed, for this build I concentrated on lighting.  These models are available with sound installed.  Mine was the non-sound DCC-ready version, and I show how I added my own sound decoder and speaker.

Likewise, though the Athearn Genesis FP7 has clear class light lenses that go through the shell, there is nothing inside to light them.  I show how I added LEDs behind the lenses.  This is not as simple as it might seem, as there is no support structure inside the shell.  I had to fabricate mounts for all the lights.  Clearance is also an issue, since the chassis occupies most of the space inside the locomotive.

Following my photos of WP 805-A at Portola, I changed the headlight in the nose door to a dual beam type.  All of the factory bulbs were removed and replaced with fiber optics and LEDs.

Even though the frame is notched for a speaker, I wanted to use a larger one so I show how I milled the frame slightly to make room.

The WPRM keeps the real WP 805-A pretty clean, generally, but I wanted my model to look more like an in-service unit.  From photos I’ve seen, California Zephyr locomotives weren’t allowed to get really filthy, but they did accumulate some road dust.  The key with this model was to keep the weathering subtle.

I did change a few details following photos of the prototype WP 805-A in the late 1960’s.  I swapped out the journal boxes on one axle and added brake lines to the trucks.

My FP7 is equipped with an ESU LokSound Select 6-function DCC sound decoder.  I have an Athearn Genesis F7B and an F3B so I can reproduce the A-B-B consist that Western Pacific typically used to pull the California Zephyr.  I also have a complete set of Broadway Limited CZ cars.  I assembled all of this equipment together to make an HO scale California Zephyr for the run-by shots at the end of the chapter.