By Anonymous User on July 17, 2015 in Example Models, Projects

Burlington Northern GP38-2 2304 is a custom painted and detailed Proto 2000 HO scale model.   BN 2304 was one of many ex-Frisco units on the railroad.   I chose 2304 because I found a photo of it from the 1990s with ditch lights and with the nose light still in place.  Most other units lost the nose light when they were fitted with ditch lights.

This model started as a conventional Proto 2000 GP38-2.  I have several of these models and they are generally very smooth and quiet runners.  This locomotive is no exception.  Mechanically the model is mostly stock.  I did have to remove some material from the large metal weight that occupies most of the space inside the shell.  That made room for the decoder and speaker enclosure.

I like Proto 2000 shells because it is easy to strip the paint off them.  I soaked the shell in Scalecoat paint remover for about 20 minutes and had an undecorated model.  I discarded the factory cab and short hood.  I also removed the cab sub base from the sill.  I rebuilt the front of my Burlington Northern GP38-2 using Cannon parts.

Proto 2000 GP38-2s have see-through fans but I prefer Cannon fans.  I also used a Cannon inertial filter hatch in place of the original part.  I used a lot of parts from Details West, including a new horn, rooftop antennas, air reservoirs and filters. 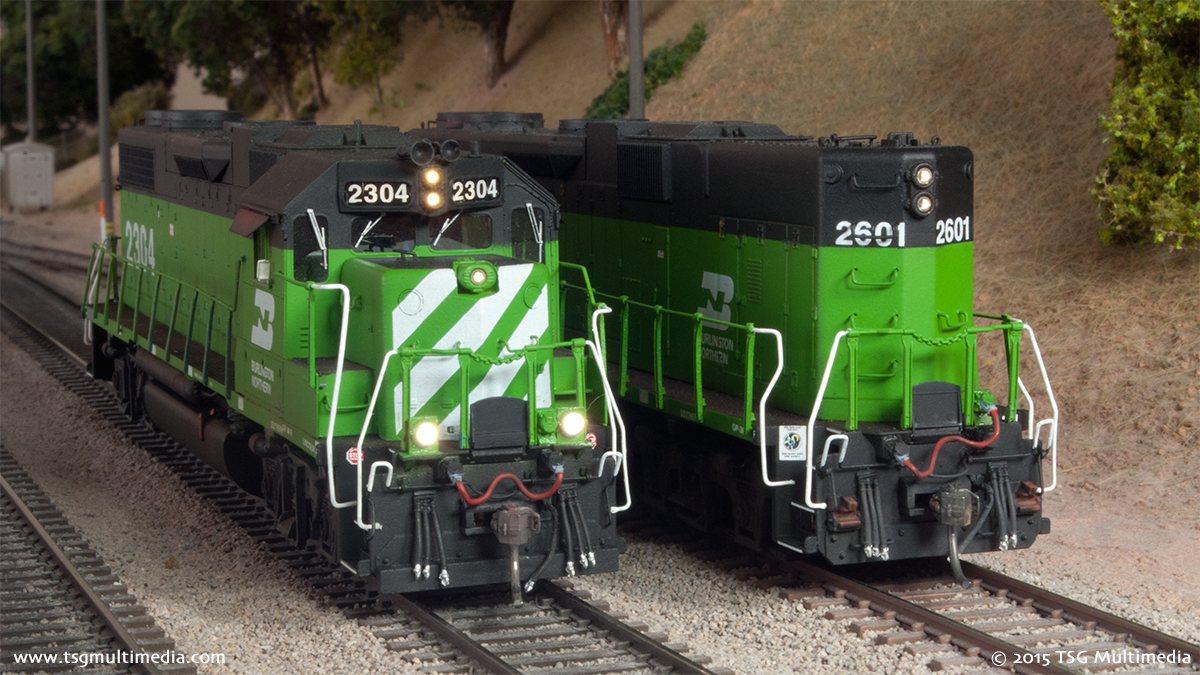 All of the factory lighting was removed.  The front and rear headlights and gyralight use 3mm warm white LEDs shining through fiber optic lenses.  The ditch lights and number boards use 603 surface mount LEDs.  All of the lights are independently controllable.  One pet peeve of mine is that most models have the numberboards lit by the same light source as the headlight.  In this model I can have the numberboards lit with the headlight off and vice versa.  The ditch lights and gyralight are also independent.

My Burlington Northern GP38-2 is controlled by a LokSound Select DCC sound decoder.  This decoder provides outstanding motor control, exceptional sound, and superb lighting effects.  The speaker is mounted in a custom built enclosure in the radiator area.