By Anonymous User on July 16, 2015 in Example Models, Projects

The fictitious TSG is a small but prosperous shortline operating somewhere in California.  TSG Passenger Cars are used for a dinner train and special excursions.

For these cars I used models from Atlas, Con-Cor, Kato and Model Power.

This old Con-Cor model was a challenge.  I bought it off eBay.  When it arrived I discovered that the previous owner had attempted to hack off the vestibule for some reason.  The seller neglected to mention this in the description.  I could have returned it but I got it cheap enough that I didn’t think it was worth the effort. 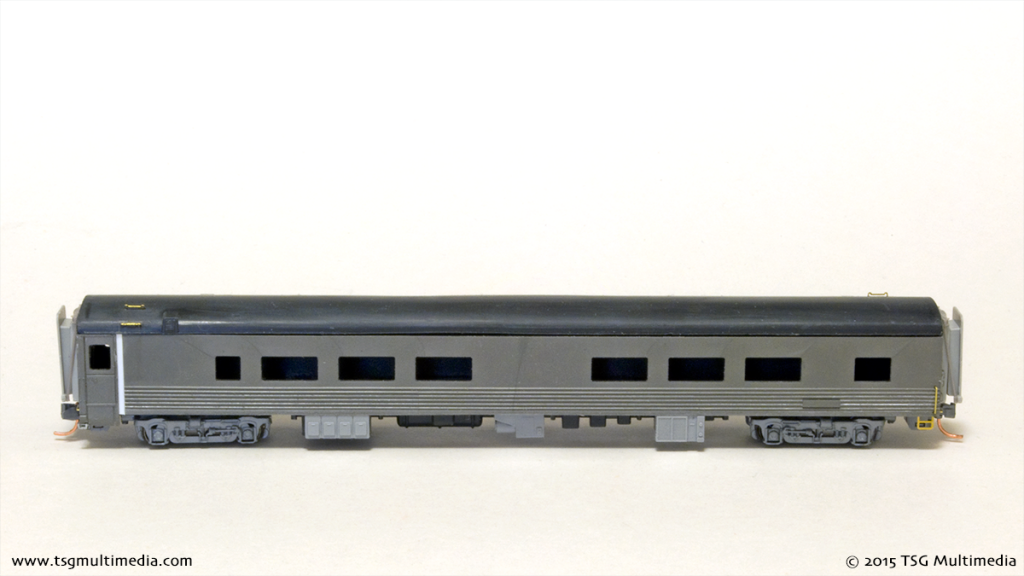 I ended up fixing the car instead.  Thankfully the vestibule detail was undamaged.  I had to saw off the vestibule.  Then I sanded off the damaged part of the car body.  I squared up the edges with some careful filing.  I added a styrene splice to make up for the length I lost while sanding.  I glued the car back together with liquid styrene cement.  The splice is the white vertical stripe in the above work-in-progress photo.  I added some leftover underbody detail from an old American Model Builders passenger car kit.  The grab irons are from Gold Medal Models. 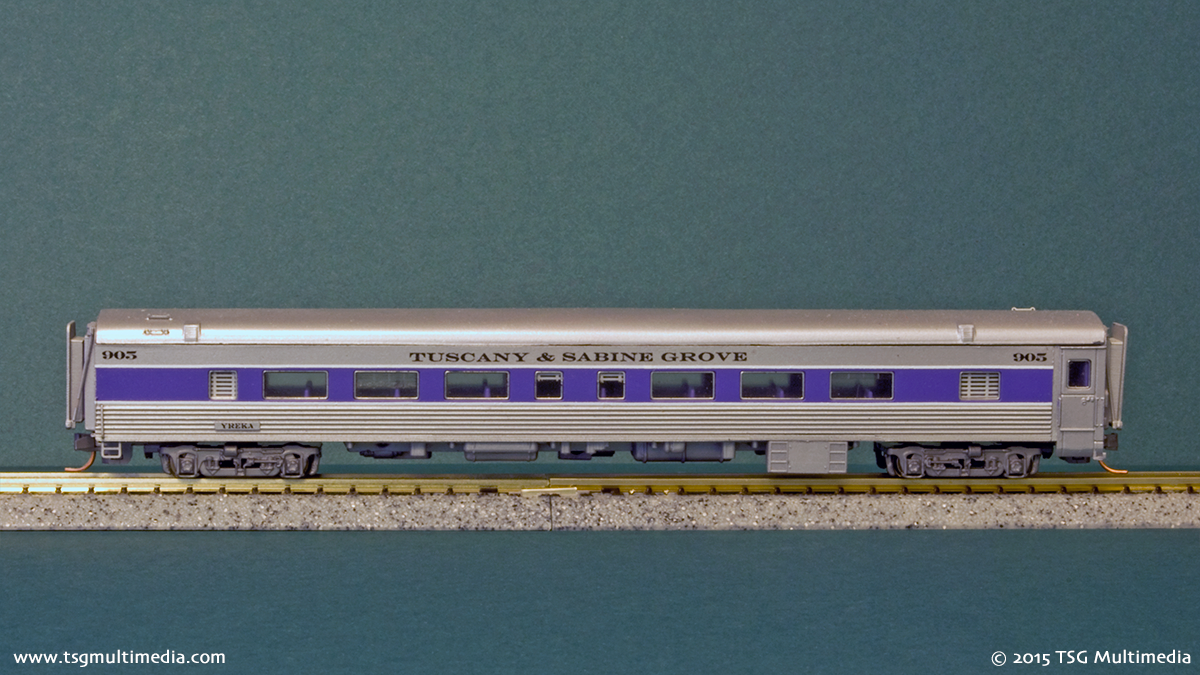 TSG 905 has a Rapido Easy-Peasy lighting kit installed.  The car was decorated with my own custom-printed decals and striping from a Microscale decal sheet.  It carries the name “Yreka” in honor of the Yreka Western Railroad featured in our Shasta Steam program.  The car has American Model Builders diaphragms and Micro-Trains trucks and couplers.  It rides on Fox Valley metal wheels.

This is another old Con-Cor car that I reworked.  This car is mostly stock.  It was painted the same way as TSG 905.  The only difference is that this car lacks the white border stripes around the large purple stripe.  I consider that a normal TSG passenger car paint variation so some cars have the white stripes and some don’t.  The diaphragms, trucks, couplers, and wheels are also the same as TSG 905. 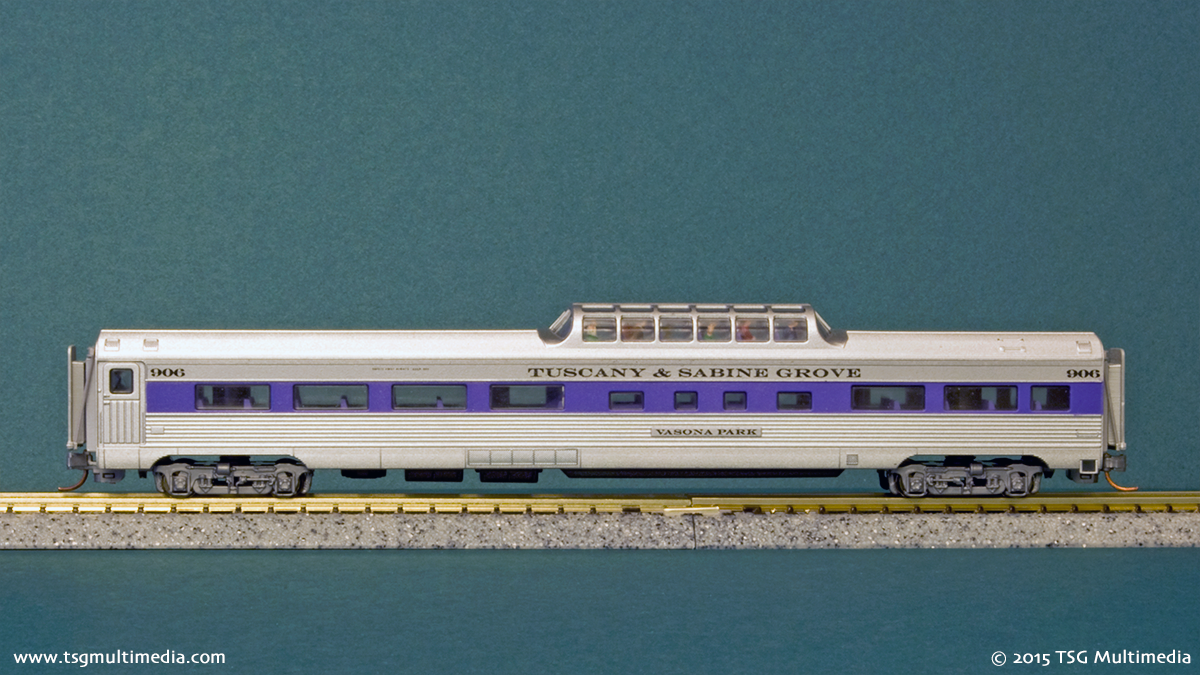 TSG 906 is named “Vasona Park” in honor of the Billy Jones Wildcat Railroad featured in Steam in Los Gatos.  I added some seated N scale figures inside the dome since that area is so visible.

This is an old Model Power heavyweight car.  I added new corner steps from Gold Medal Models on the passenger end and stirrups on the baggage end.  This car is equipped with Micro-Trains 6-wheel heavyweight trucks.  Like the other cars it also has American Model Builders diaphragms. 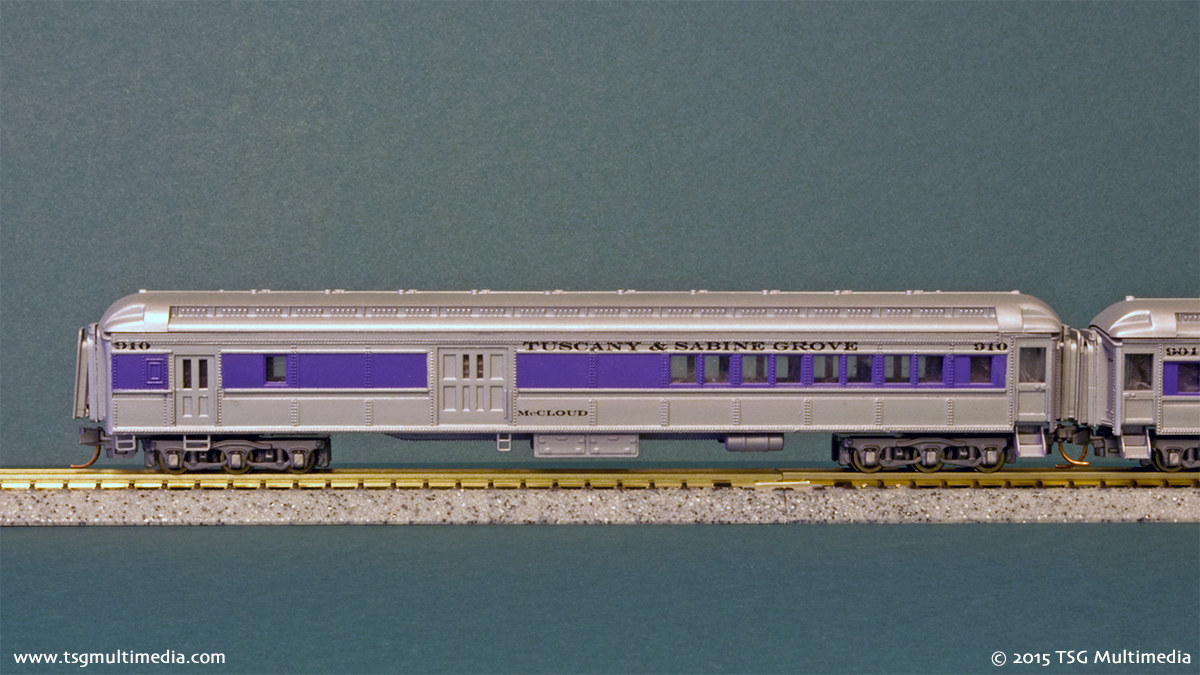 TSG 910 is named “McCloud” after the McCloud River Railroad.  This line was also featured in our Shasta Steam program.

TSG 912 is an Atlas combine that I converted into a power car.  I cut out areas on the sides and added some grills from a Walthers HO scale rooftop air conditioner kit.  I cut off the skirting on both sides except for one small area.  I then added some detail to the underbody.  The fuel tank was fabricated from styrene.  Most of the other details were made up from bits of scrap and brass wire. 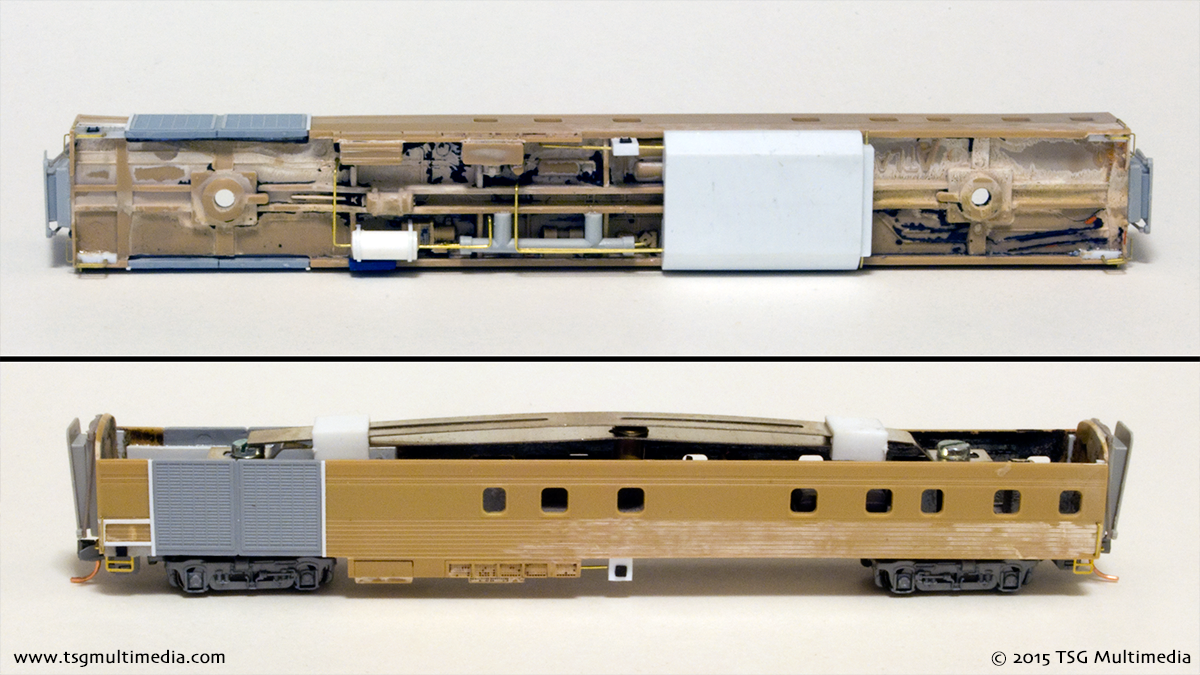 The car follows no specific prototype.  It was inspired by some full-sized power cars that I’ve observed.  The lower work-in-progress image shows the stock lighting kit still in place.  I ended up removing that.  The car currently has no lights. 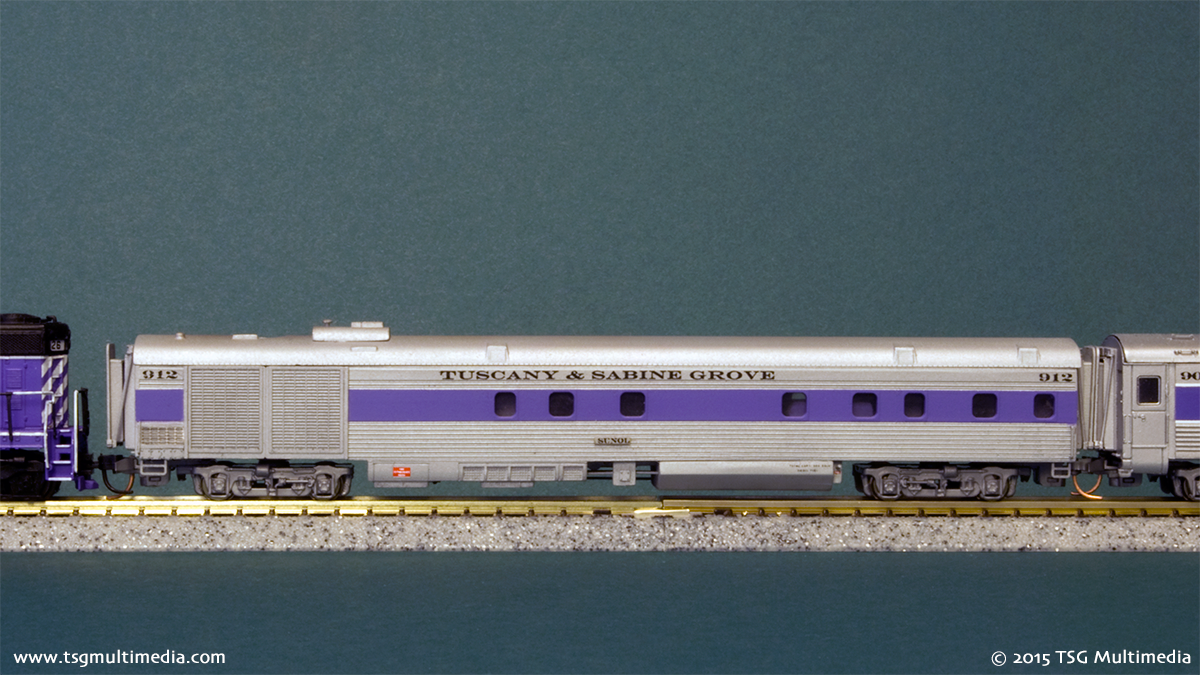 TSG 912 was painted to match the other cars.  It has the same trucks and diaphragms as TSG 905.  TSG 912 is named “Sunol” in honor of the Niles Canyon Railway which has been featured in a number of our programs including Steamfest III 2014.

TSG 923 is a mostly stock Kato model.  I installed Micro-Trains couplers in the original trucks.  The car also has American Model Builders diaphragms.

TSG 923 is painted in the standard TSG passenger car scheme and named “Santa Cruz” after the city featured in our The Beach Train program.