Athearn’s Ready-to-Roll SD40T-2 tunnel motor is a vast improvement in terms of detail and accuracy than the earlier “blue box” SD40T-2.  Athearn also makes an SD45T-2 in the Ready-to-Roll line that is very similar and like the prototype uses the same chassis.  Being a longtime SP modeler, I ended up with several of each.  The Southern Pacific and Denver & Rio Grande Western were the only two railroads to purchase these units new.  Some of them made it into Union Pacific paint after the merger in 1996, and since then many have been sold off to other railroads and leasing companies.  I currently own four SD40T-2 models, two Southern Pacific, one Cotton Belt, and one Rio Grande.

Athearn did a good job in making these models with prototype-specific details.  The DRGW and SP/SSW units have different headlight arrangements, for example.  Despite that, there are a few things about these locomotives that can be improved.

Since I model the 1990s, I removed the oscillating lights from SP 8277 and added functional ditch lights.  The original factory bulbs were removed and the headlights were redone with fiber optics and LEDs.  The ditch lights use tiny surface-mount LEDs that fit inside the light housings for a very prototypical look – no wires sticking out the back.  The stock Athearn SD40T-2 does not have lit number boards, so I reworked mine and made them operable and controllable independent of the headlight.  I even created my own decals to reproduce the DRGW-style numbers.  It’s possible to have the locomotive parked on a side track with only the number boards lit.

The factory supplied snowplows on these units leave a lot to be desired, so I replaced mine with aftermarket parts.  I’ve always loved the look of the large SP plows.  I added aftermarket walkway tread and photo etched steps, installed air filters and other plumbing under the side sills, added brake lines to the trucks, replaced the dynamic brake fans with better looking Cannon parts, added windshield wipers, and more.

As built, the SP and Cotton Belt units had “L” shaped engineer’s windows on the front of the cab, but over time these were replaced with two individual pieces of glass.  I found a way to simulate that without replacing the entire cab, and that technique is covered in the program.

These models do not have a provision for sound, so I also show how to add a speaker and enclosure.

The locomotive was weathered from photos that I found of the prototype SP 8277 in the early and mid-1990s.  Because I worked from photos, this locomotive is not as sooty as some SP tunnel motors sometimes looked after spending some time in the snowsheds on Donner Pass.  Some of SP’s SD40T-2 diesels got so black that the road name was all but invisible, but 8277, at least in the photos that I had, did not look quite that bad. 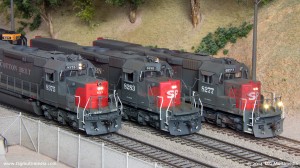 The above photo shows all four of my Athearn SD40T-2 models.  Cotton Belt 8375 retains its original light package and has the extended “snoot” nose.  SP 8283 has lost its oscillating lights and has a beacon mounted on the cab roof.  SP 8277 has ditch lights.  Just visible in the back is DRGW 5371, which also has its as-built oscillating light in the nose.  All except the Rio Grande unit have had their class lights removed, with various ways of plating over the openings.  All of these models were done following prototype photos.

SP 8283, incidentally, was our “stunt” engine during the production of this program.  Because it is nearly identical to SP 8277, sometimes we would part of 8283 for a shot if the situation required it.

The run-by shots of SP 8277 at the end of the chapter feature all four of these engines pulling a long freight, a scene that I very much enjoyed while we were shooting it.

All of my Athearn SD40T-2 models are equipped with ESU LokSound Select 6-function DCC sound decoders.  Each unit has LED lighting and all the major lights work (even the red oscillating lights on the Cotton Belt unit and the class lights on DRGW 5371).  Aside from individual differences in lighting, all of these models are set up similarly inside.