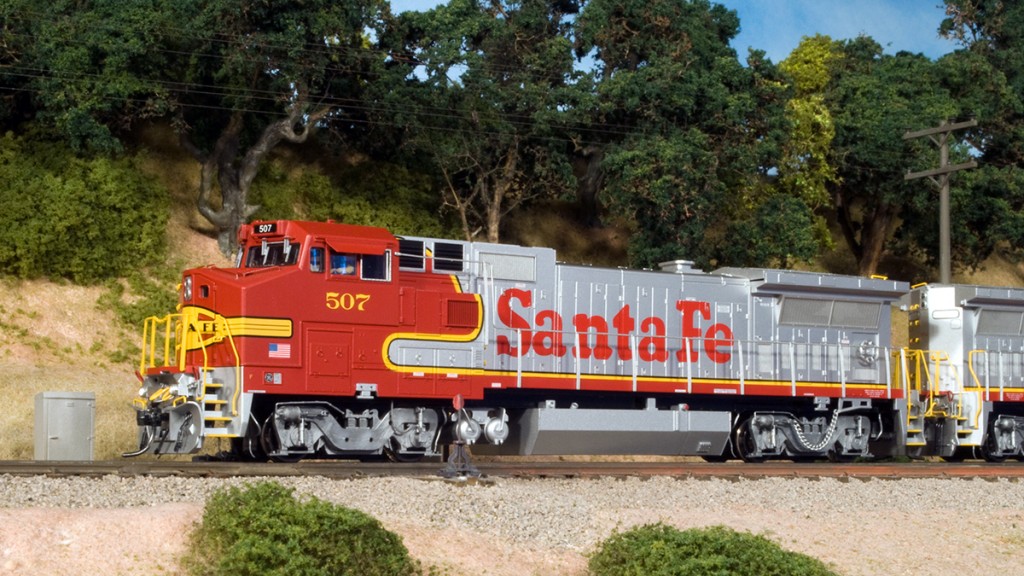 As a longtime fan of Santa Fe’s Super Fleet scheme, I was elated when Atlas brought out their B40-8W in warbonnet red and silver.  Like many recent Atlas offerings, these units were available with and without sound.  I have several, but only one of my B40-8Ws, No. 507, was equipped with a factory-installed QSI sound decoder.

So why am I featuring a locomotive that already has a decoder installed?  Well, after this locomotive was made, QSI released a chip upgrade for the sound decoder.  Since many other modelers likely have early QSI locomotives that need a chip upgrade, I thought it would be good to include this on the DVD.

The Atlas B40-8 and 8W are great models, but they are a little bit of a pain to take apart.  On the DVD I cover how to do that, too.

No. 507, along with sisters 552 and 563, are featured in a three-way comparison later on the DVD. No. 552 is equipped with a QSI Revolution, and No. 563 has an ESU LokSound 3.5.  Since the mechanisms are identical, any differences in sound and performance can be attributed to the decoders.

Back in the early 1990s, when the full-sized B40-8Ws were new, I remember thinking that I wanted to have one or two, but that they would be a real pain to kitbash.  Thankfully I had the good sense to put that project on the back burner, and eventually Atlas brought out these models.  I haven’t taken out my scale rule and compared the models to blueprints, but just eyeballing things they look pretty much like the locomotives pictured in my Santa Fe motive power annuals.  A few of the details are a little on the coarse side, like the windshield wipers, but that’s minor and easily fixable.  These are excellent runners, very smooth and so quiet that you can barely hear anything with the sound muted.

The factory-installed QSI decoders generally run pretty well. Sound quality is subjective, and no sound decoder is going to sound like a full-sized locomotive, but I think the QSI GE sounds are pretty good.

Though I like these decoders overall, I find it hard to get a linear throttle response at very low speeds.  The minimum BEMF CV creates the effect of having the locomotive start and crawl at a constant speed when my throttle is between 1 and 9 or 10 or so. Beyond that, it accelerates in a linear fashion.  This is really only a problem when you mix brands of decoders and want to get your locomotives to play nice with one another.  I don’t want to have any artificial restrictions on making up consists, so I strive to match the performance of every locomotive in my fleet as closely as possible.  With tweaking I have been able to minimize but not completely eliminate this effect.  Unfortunately turning off the minimum BEMF (setting CV 56.5 to 0) doesn’t work very well, either, as then the ability of the locomotive to sustain low speeds suffers greatly.

Factory QSI decoders are set up for the model that they come with, as you would expect.  However, there is no real provision for extra lighting outputs, if you wanted to add ditch lights or a beacon or some other light that wasn’t originally on the model.  I have read about some people “hacking” the decoders to get more lighting functions, but I am hesitant to do that.  If I wanted to add lights I would probably use a second decoder, like a TCS Fleet Lighter.  It’s not an issue with this model, as it already has all the lights that it needs.