By Anonymous User on August 8, 2015 in Example Models, Projects

I custom painted some N scale log cars for our fictitious Tuscany & Sabine Grove railroad.  Somewhere along this imaginary line there is a lumber mill or some other industry that either uses or produces logs.  Naturally the T&SG needs some equipment to haul them.

Two of my N scale log cars are from Walthers.  I have a few more of these decorated for other railroads or private owners.  I also have some of the Micro-Trains log cars.  All together they make a fairly decent length train. 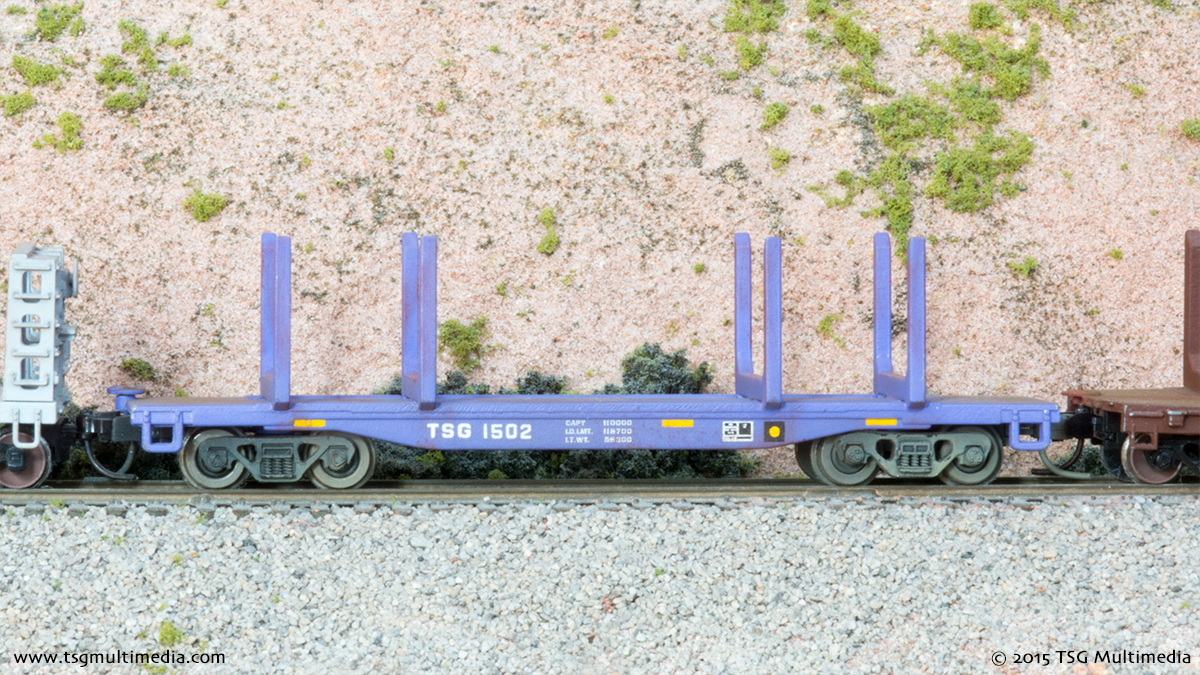 This car started as an undecorated Walthers log car.  I installed Atlas metal wheels in the original trucks.  The design of the car prevents the use of Micro-Trains trucks with truck-mounted couplers.  The coupler boxes hit the underside of the car floor.  Eventually I may body mount some Micro-Trains couplers and substitute Fox Valley wheels.

The car was painted in Polly Scale Atlantic Coast Line purple.  Since that paint is no longer available I may have to use a different color in the future.  I still have a bottle or two stashed away.

The markings are from various Microscale N scale freight car data decal sheets.  The reporting marks were pieced together from an alphabet sheet.

I used powders to dirty the upper surfaces of the car.  The truck sideframes were airbrushed with a thinned earth color paint. 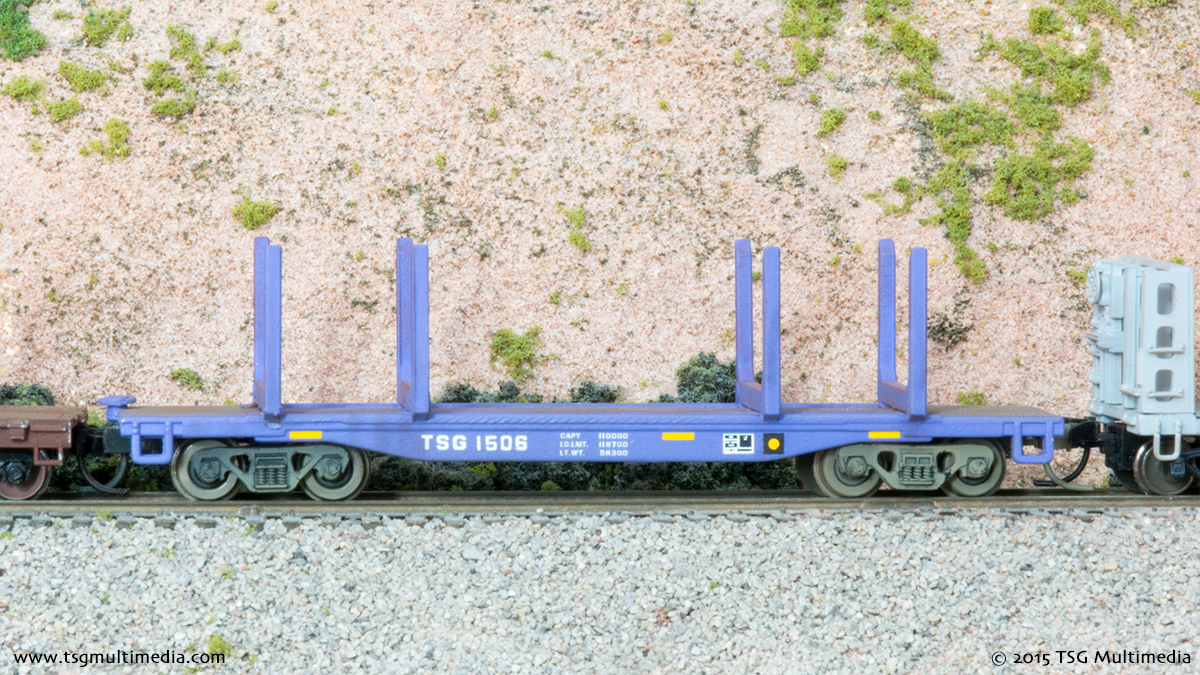 This car is almost identical to TSG 1502.  I came up with a numbering scheme for our fictitious railroad.  Log cars are in the 1500 series.  I try not to use consecutive numbers when making multiple cars.  I think that makes it seem like there are more cars on the railroad somewhere.  If there is a 1502 and a 1506, then most likely there is also a 1501, 1503, 1504, etc.  These theoretical cars don’t have to actually be modeled.  Their presence is suggested by the number sequence. 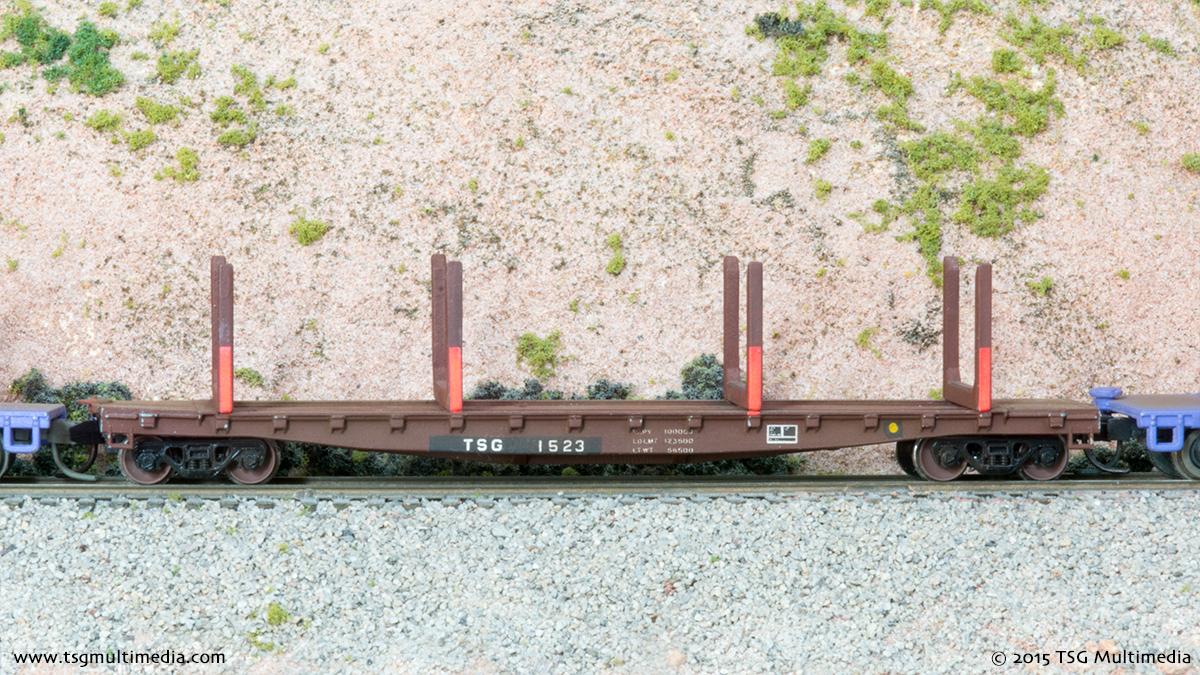 This car is different than the other two N scale log cars.  I purchased this one secondhand off eBay.  I don’t often buy kitbashed models built by other people so this one was an exception.  When it arrived it looked much as it does now.  I don’t know who made the flatcar body.  It appears to be made of die-cast metal.

The car had minimal markings when I got it.  I patched over the original number and assigned a T&SG number.  1523 is still in the log car series.  Since this one is an oddball it suggests that there are at most twenty or so cars like 1502 and 1506.  I added the data and wheel inspection dot with decals.  The red warning stripes were already there.

I did replace the brake wheel on the car with a more modern one from Gold Medal Models.  I also substituted Micro-Trains roller bearing trucks for the original.  The car is equipped with Fox Valley wheels.