By Anonymous User on February 18, 2015 in Example Models, Projects

As it happened I had several Athearn “blue box” SD40-2s in my storage room.  I decided to build one of those into a Canadian Pacific SD40-2.  Because the GMD-built SD40-2s from Canada have a lot of detail differences from the US-built versions, I decided to model an ex-SOO Line unit.

Perhaps ironically, the model I chose was an un-powered unit already painted in SOO red and white.  I stripped the paint and went to work on the shell.  I cut away the entire cab, short hood, sub base and inertial filter hatch and replaced those pieces with Cannon parts.  My model lacked dynamic brakes so I substituted an Athearn extended range dynamic brake hatch from my spares box.  I used Cannon dynamic brake fans and Detail Associates “Q” fans in the radiator area.  The winterization hatch is from Details West.  The rear number boards were opened up so that they could be lit later.  All molded on grab irons were removed and the shell was drilled to accept free-standing grabs. 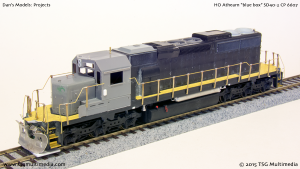 On the sill of my Canadian Pacific SD40-2 I used Cannon walkway tread and photo-etched steps.  The handrails were fabricated from Precision Scale brass stanchions soldered to brass wire.  The air reservoirs and underframe details like the bell and air filters are from Details West.  I had to fill in the original side mounting holes for the frame with styrene.  I also reshaped the contour of the sill a bit to match the prototype.  The uncoupling levers are custom made with Detail Associates brackets.  The plow is from Details West. 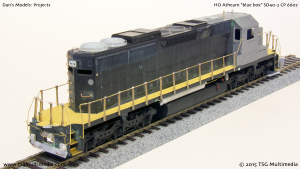 The model was powered by adding Athearn gears and metal wheels to the original trucks.  The model has a can motor with flywheels.  Athearn drive components transfer power from the motor to the trucks.  The frame was modified by removing the original mounting lugs.  The coupler mounting pads were drilled and tapped to accept 2-56 machine screws.  When assembled the couplers hold the shell and frame together.  The fuel tank was also sanded down and reshaped.  The original molded-on details were ground off and replaced by aftermarket and custom made parts.  Styrene end caps were added to the front and rear of the fuel tank.  The pilot areas were also reworked.

After painting I used Microscale decals to decorate my Canadian Pacific SD40-2 in the 1990s-era “flags” scheme.  I cut custom clear styrene numberboards for the back end.  The cab glazing came with the Cannon kit.

The Canadian-style ditch lights are from Miniatures by Eric.  They were drilled out and lit with 603 surface mount LEDs.  Another 603 LED was installed in the custom-fabricated beacon.  603s were also used to light the numberboards on both ends from behind.  The numberboard LEDs are mounted in custom styrene enclosures to prevent light leaks.  The front and rear headlights are lit by 3mm LEDs mounted inside the shell.  Fiber optic strands carry the light to the lenses.

The model is equipped with an ESU LokSound Select DCC sound decoder.  The speaker is mounted in a custom enclosure mounted in the back of the locomotive in the radiator area.