By Anonymous User on December 25, 2013 in Example Models, Projects 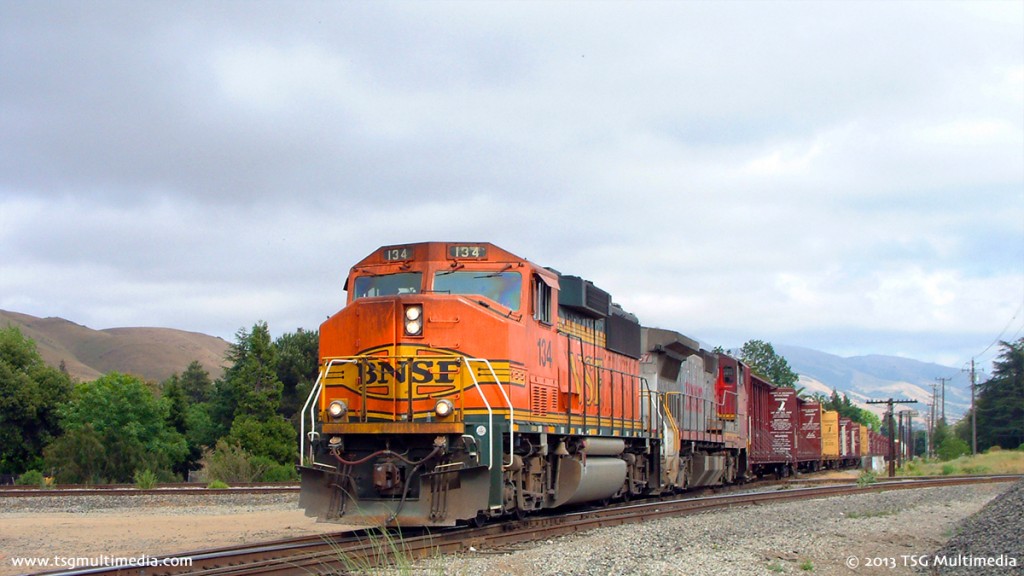 One of the locomotives I built for our upcoming HO Weathering & Detailing series on diesels is an Atlas B40-8W, BNSF 557.  I chose that model because we photographed the real 557 in Niles, California in 2008 while producing our A Day at Niles video.  As it happened 557 was running with another locomotive that day, BNSF GP60M 134.  Since we are planning to do run-by shots at the end of each chapter in the Weathering & Detailing video, I got the notion also make a model of BNSF 134 as a companion for 557.

I found a used GP60M in BNSF Heritage II colors on eBay at a reasonable price so I bought it.  It had the wrong number on it, but that was relatively easy to correct.  I spent quite a bit of time detailing the shell of the GP60M.  Because the frame is silver and so visible on this model, I also did a lot of work in that area.  I milled the sides and then used some plastic strips to mimic the “C” channel of the prototype locomotive.

I’d given the locomotive a quick test run when I bought it and then immediately took it apart so I could work on it.  Since I was grinding the metal frame I removed the Athearn motor and set it aside along with the trucks and driveshafts.  I didn’t want to take any chances that metal shavings would get into the moving parts. 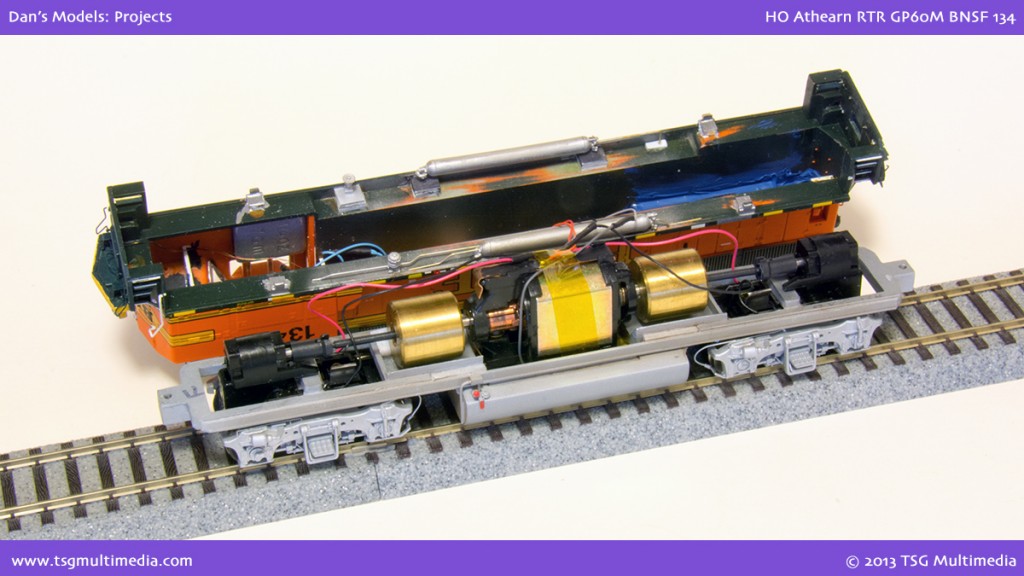 When I finally had the chassis reassembled and the shell mostly done, I installed a LokSound Select DCC decoder and speaker.  I like to test things as I go so I put the locomotive on a short piece of track and ran it.

The engine ran well, but was making a very audible ticking noise.  I did some checking and quickly ruled out wires rubbing on the driveshafts or any problem with the trucks.  That left the motor.  When I disconnected the driveshafts, I noticed that the motor had a definite hitch once per revolution when I rotated the motor shaft by hand.

I thought maybe I had a bad Athearn motor, but then I decided to try something simple.  I put the model on a test track with the trucks mounted but left the driveshafts disconnected.  I then applied power and let the motor just run for a while.  I ran it for a couple of minutes at full throttle going forward, and then did the same in reverse.  Without the driveshafts the model was going nowhere fast.

Once I’d done that the motor no longer had a point where it felt like it wanted to seize up when I rotated it by hand, and the ticking noise was gone.  I suspect that even though the model was listed as used on eBay, it had not been run much if at all.  Probably the motor brushes had not had time to seat themselves, and a little running fixed that.

The motor is still has a bit of that growl that all Athearn motors seem to have, but with the shell in place and the sound turned on this really isn’t that audible.

I was glad that in this case the solution to the problem was so easy.  So I guess the moral of the story is that, at least in some cases, it really does pay to “break in” a model with a little bit of running.