Though currently out of production, the Kato SD40 is still a very nice running model and there are quite a few of them out there.  It is arguably still the best HO scale SD40 on the market, and examples show up regularly on eBay.  I’m sure I’m not the only modeler who has a Kato SD40 or two (or five) in my closet awaiting attention.

Oddly enough, this is the one model in either HO Weathering & Detailing diesel volume that does not belong to me.  A friend loaned it to us for the production (probably to get free work out of me).  He models an earlier era than I do, and so when planning this build I wanted to make the SD40 correct as it would have appeared circa 1980.

While the model came painted for Burlington Northern, it was numbered as an ex-Colorado & Southern unit that had SD9 style trucks on it.  Since changing out the trucks would require some rather inventive surgery, I opted instead to change the number.  I chose BN 6309 since I found good photos of that unit.  I also wanted to correct some flaws in the factory paint, like giving the model the correct black walkways and step wells instead of green.

While it’s hard to find something even today that runs better than a Kato, some of the detail on these models is lacking.  I spent a lot of time reworking the front and rear pilots on this model.  I also installed Cannon fans up top.  Though I kept the stock cab, I filled in the brake recess on the short hood since this unit has a rear-mounted brake wheel. 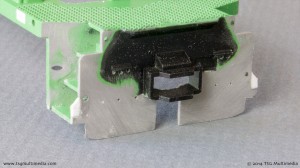 The above photo is a work-in-progress shot of the front pilot of the SD40.  By this point I had removed the footboards, sanded the pilot face smooth, cut notches for the uncoupling levers, drilled holes for MU hoses, drilled holes for nut-bolt-washer castings, filled the outsized factory handrail mounts, and created fillets at the lower step corners to create the correct pilot shape for this unit.  In the program I show this as well as how I finished the pilots, including adding photo-etched steps.

Though this is a deceptively stock-looking SD40, I modified the model with quite a few aftermarket parts.  In addition, I got rid of the stock handrails and built new ones out of brass that are closer to scale in size and hold paint much better.  This was quite an involved build, and all of it is covered in the program.

I installed an ESU LokSound Select 6-function DCC sound decoder in the this model.  The Select has one of the best beacon simulations that I’ve seen, and I put that to good use on this unit.  I also made the number boards work independently from the headlights, and made the class lights operable.

View all posts by TSG Multimedia →