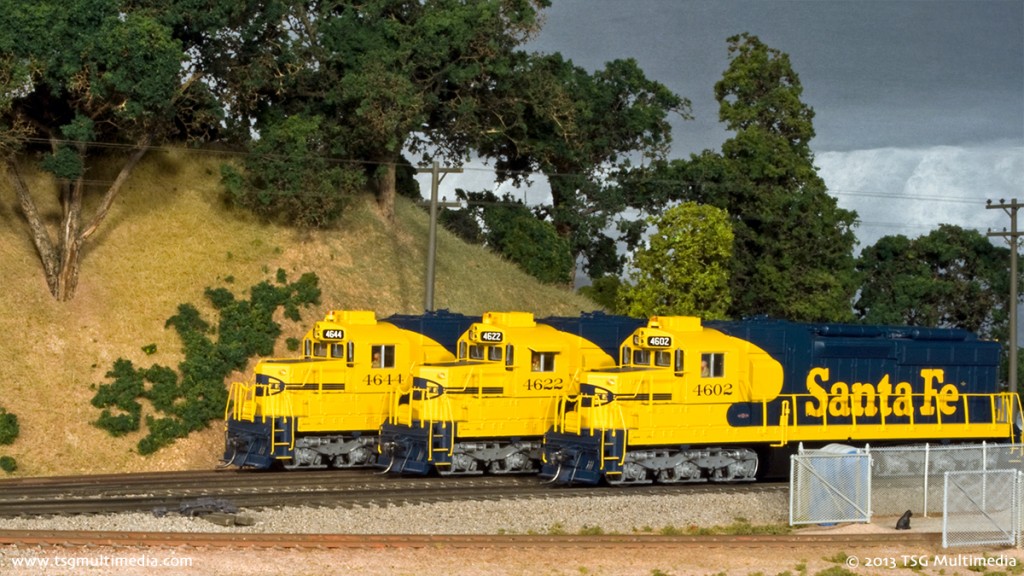 I decided to do a three-way comparison using identical Atlas SD26 locomotives fitted with different decoders.  Since these locomotives are virtually identical except for the electronics, and are very smooth and quiet runners, any variation in performance can likely be attributed to the decoders.

In this case No. 4602 has a Sountraxx Diesel Tsunami (installation of this decoder is covered on the DVD).  No. 4628 has a factory-installed QSI Quantum decoder with the version 7 upgrade, and No. 4644 has an ESU LokSound 3.5.

The test on the DVD compares sound volume, sound quality, and low-speed performance.

Since I came up with more to talk about than could be practically included on the DVD, I’ve included some additional information below.

I have a strong personal bias toward locomotive performance over sound.  I have quite a number of sound equipped locomotives at this point, and sound is no longer a novelty.  Full-sized locomotives are not designed to be noisemakers.  They are designed to move trains, and the noise is a by-product.  That isn’t to say I don’t think sound is important.  It’s just that I am not willing to sacrifice performance to get it.

I especially value low-speed performance.  I’m not one of those people who wants to have a crawling contest to see how slowly the locomotive can creep from one tie to the next.  Good low speed performance, however, gives the locomotive the ability to achieve that almost imperceptible transition between moving and not moving that I see all the time with full-sized trains.

For me, nothing spoils the illusion on an otherwise beautiful model railroad faster than seeing a nicely detailed and weathered locomotive launch out of the station like an F-18 Hornet off the deck of the Nimitz.  If the goal is to simulate the operation of full-sized trains, then they need to be able to start and stop smoothly.

Imagine starting a long coal drag on a hill.  In real life, that train would be crawling as it started.  Acceleration would be very, very gradual.  That’s what I want to be able to simulate.

When operating a train, what really adds life for me is being able to use the horn/whistle and bell in the same way they would be used on the prototype.  Even driving a locomotive back and forth on a test track becomes more interesting if you have to remember to use the horn and bell appropriately.  Other noises are less important to me, really just ambiance.  Also, when you have a large number of sound-equipped locomotives on the layout at once, you are probably going to want to turn down the prime mover noise and other noises that operate continuously, otherwise the layout just becomes a big white noise generator.  The horn and bell can be louder because those are only used sporadically.

I’m not trying to imply that people who think sound is more important than performance are wrong.  This is, after all, a hobby and you can do things any way you like.  I just want you to know where I’m coming from when I say that I like or don’t like something.

The number of function outputs available on a factory installed QSI decoder usually depends on the particular locomotive.  In this case my SD26 has at least two functions for the front and rear headlights (the beacon is non-operational).  I have heard some talk on the internet of people hacking these decoders to discover additional lighting outputs, but I’m a little hesitant to try that myself.  If you need more light functions you can always add a second function-only decoder like a TCS fleet lighter.

At the time we were making this DVD there was not a Diesel Tsunami with an EMD 567 and a turbo available, which would be correct for the SD26, so I opted for the non-turbo 567.  I have to say that the Diesel Tsunami produces the most realistic diesel prime mover sounds I’ve ever heard.  The”notching” as the locomotive accelerates is superb, without the operator having to do anything to make it work.  I am less impressed with the horn, but that may have something to do with my speaker choice.  One nice feature is that there are 15 different horn sounds that can be selected by simply setting a CV.

The QSI equipped locomotive has excellent sound, though for my tastes the turbo noise was a little too loud by default.  Fortunately individual sound levels can be adjusted through CV programming.  If you use momentum then you can get a better “notching” effect by cranking the throttle to a high speed, letting the motor sound rev, then backing off before the locomotive has a chance to get going.

The Loksound EMD sound sets are very good, especially at idle, though the diesel “notching” effect is not as well implemented as on the Tsunami or QSI.  The prime mover simply keeps pace with the locomotive’s speed.  Since I personally tend to keep prime mover noises at a very low level, this is not a major concern for me, but it may bother some people.  The LokSound can be configured for “manual notching”, where the prime mover noise can be controlled by pressing function keys on your DCC controller.  To me that seems like a lot of extra work, so I have not been inclined to bother with it.

The Tsunami does not offer programmable sound, though it does have a number of pre-programmed horn sounds that can be selected by setting a CV.

Both the QSIs and the LokSound 3.5 feature programmable sound sets, but require a computer and a proprietary interface device to facilitate this.  Both the QSI Programmer and LokSound Programmer require a Windows-based PC.  Unfortunately as of the time we made this production, the Mac OS was not supported by either company.

Note: The LokSound Programmer can be run on a Mac with Windows installed using an application like Parallels Desktop.  The QSI software might work also, but I haven’t personally tried it.

I am disappointed with the Tsunami’s motor control.  I spent many hours tweaking this SD26, and though it runs okay, there is still a slight jerkiness to the movement that I have not been able to get rid of.  This has been an issue in every Tsunami install I’ve done, not just this particular model.  I have spent dozens of hours trying to get better performance out of my Tsunamis, trying all kinds of combinations of settings for the motor control CVs, and the only way I have found to completely smooth them out is to turn off the BEMF entirely.  Unfortunately doing that generally impairs the locomotive’s ability to sustain low speeds.

I did find that while the QSI decoders are generally capable of excellent slow-speed performance, it was a little more difficult to program them to get them to operate the way I like.

Mainly the “minimum BEMF” CV interferes with the start speed, making it difficult to achieve a linear acceleration at very low speeds.  The locomotive has a tendency to start moving, level off, then accelerate when the throttle is advanced beyond 10 percent or so.  This isn’t so bad if you have an all-QSI fleet, but if you want the decoders to play nice with other brands, it can be a bit of a problem.  I was able to reduce but not eliminate this effect by tweaking other motor control CVs.

I love the ultra-smooth performance of the LokSound decoders.  Even the default motor control settings work well, and with just a bit of tweaking can be made even better.  They are very steady even at very low speeds.  I have tried many brands of decoders and I have yet to find anything that will make a locomotive run better than a LokSound.