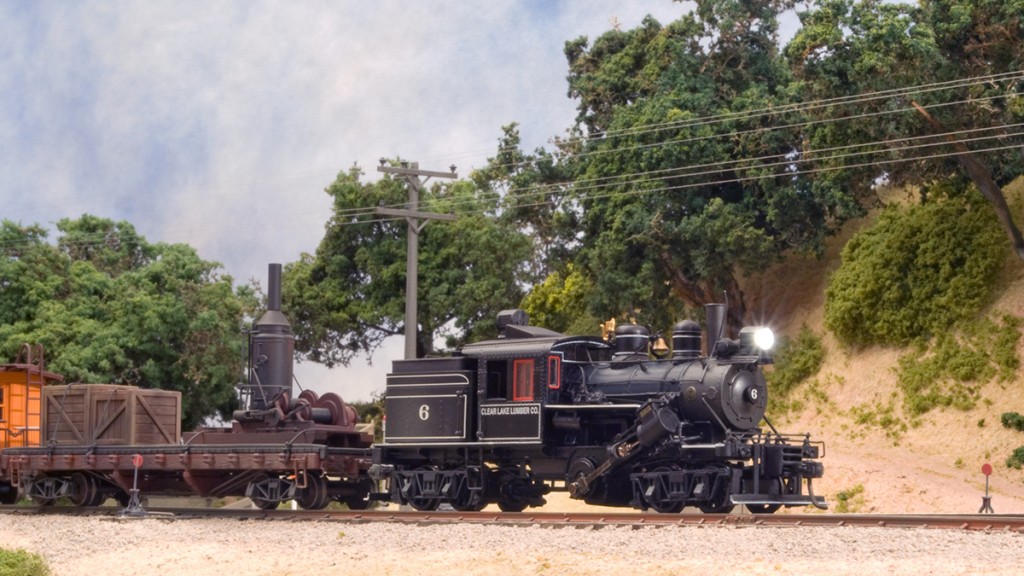 Making up a fictitious shortline with a tourist operation is a great excuse to run equipment that wouldn’t normally fit your chosen theme and era.  The Bachmann Spectrum Climax was one of those models I just couldn’t resist.

On the DVD I show how I squeezed a Sountraxx Micro Tsunami and speaker into this tiny locomotive.

Only common CVs or those that were changed from their default values are listed.  Some settings reflect my personal preferences for sound and performance.

The Bachmann Spectrum Climax actually drives its wheels like the real thing, through the central driveshaft and a system of gears on the axles.  There is enough slop in the mechanism that the operation is sometimes slightly rough, though the locomotive is geared so low that often the effect is not noticeable.  The drivetrain is also a bit noisy, especially in reverse.  Some of the noise seems to be coming from the motor itself, as if the motor shaft is in need of a little oil.  Unfortunately there is no way to lube the motor without completely disassembling the locomotive, not an easy task.  In spite of that I really like this little locomotive.

The Climax relies on copper contacts touching the backs of the wheels for electrical contact.  If the locomotive hasn’t been run in a while, these sometimes become oxidized and cause frequent stalling.  This usually goes away if you can get the locomotive to run for a few minutes.

The Climax has really nice detail, with quite a bit of delicate plumbing.  The floor of the fuel bunker has holes in it already to accommodate a speaker, though there is no actual speaker mount.  My only complaint with the appearance was that it was originally equipped with LED headlights that glowed orange like a streetlamp.  I replaced the LEDs in my locomotive.  If you’d like to see how I did that, I did the same thing to Tuscany & Sabine Grove No. 4, a Bachmann Spectrum 4-4-0 that appears in HO DCC Installs Volume 1.

Even though this model is lettered for another railroad, I consider it part of my T&SG tourist operation, and as such opted to replace the stock coal load with an oil bunker that I fabricated from some brass sheet.  I used a commercial casting for the filler hatch.  I should note that even though the bunker sticks up higher than the coal load, the bottom is solid so it doesn’t make for any more room inside the locomotive, and offers no advantage when it comes to installing DCC.

The Soundtraxx Micro Tsunami delivers outstanding sound quality and great lighting effects.  There are myriad options to tweak the sounds.  The Tsunami has more sound-related CVs than any other sound decoder I’ve encountered.

Unlike some other sound decoders, the Tsunami is not reprogrammable.  It does come with several alternate whistles that can be changed by setting a CV.  I do like the fact that Soundtraxx made all of the features of the Tsunami configurable through CV programming, so you don’t need a computer and proprietary hardware to get the most out of the decoder.

I have been generally disappointed in the ability of Tsunamis to actually run the locomotive, as they tend to be somewhat jerky even after spending many hours tweaking the motor control CVs.  It’s kind of a wash with this Climax, however, since the mechanism has some roughness anyway.  No decoder is going to be able to cure mechanical issues.

The Tsunami does not do a very good job keeping the steam chuffs in sync with driver rotation at different speeds.  I usually prefer to use a cam with a Tsunami, however I didn’t see a good way to do that with this locomotive.  Instead I set CV116 to a value that sounded about right at low speeds.  It works okay in this model, since I never give it more than about 30 percent throttle anyway.  Beyond that the locomotive just gets louder, not necessarily faster.

I should note that I did not try to speed match this locomotive to any of my others, mostly because it is so much slower.  Its speed range seems about right for a logging engine – slow!  There’s just no way this thing could keep up with my other locomotives.  It’s not a huge problem, as I just operate this locomotive by itself.