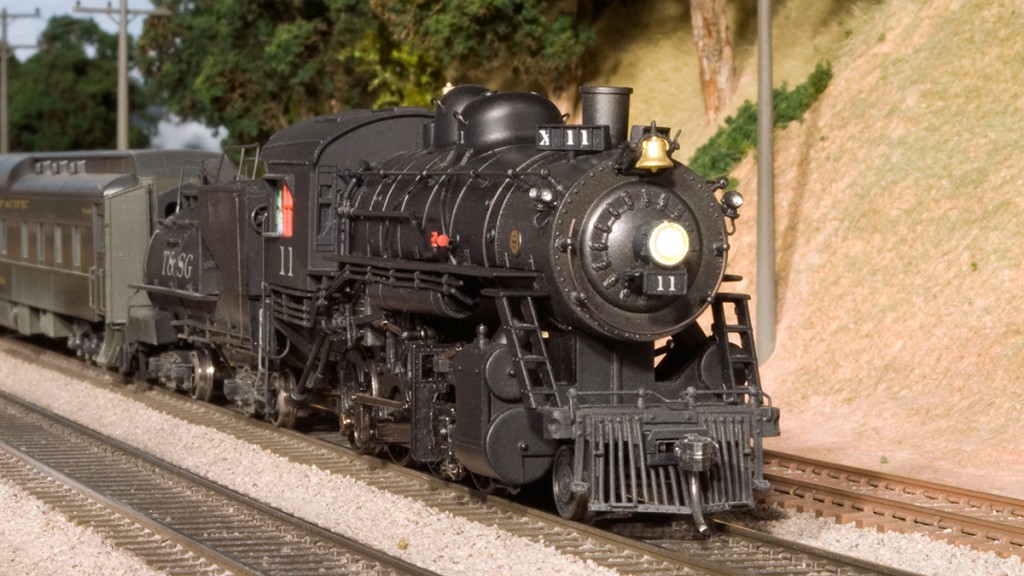 Though I do a lot of prototype modeling, one of the things I love about freelancing is the ability to be creative.  When it came time to model the Tuscany & Sabine Grove’s other excursion locomotive (T&SG No. 4 appears on HO DCC Installs Volume 1), I wanted to do something to make this common model more unique.  I decided to blend details from my two main prototype railroads, the Southern Pacific and Santa Fe.

On the DVD I not only show the installation of a Soundtraxx Light Steam Tsunami, but also how I reworked the headlights with LEDs in new Santa Fe-style castings.

Probably the most dramatic modifications I made to this locomotive were to swap the coal tender for a Bachmann SP-style Vanderbilt tender, change the headlight castings for Santa Fe-style pieces, and add a Santa Fe-style pilot. 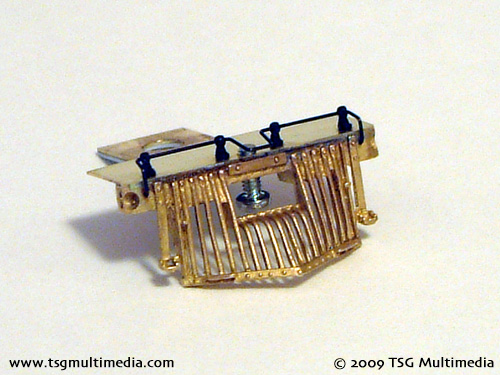 The pilot started as a brass casting.  Using the original plastic Bachmann pilot as a guide, I built a new deck and support from brass pieces. 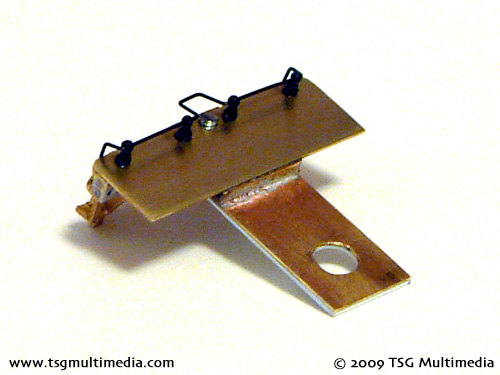 I soldered the entire pilot assembly together, and filed the top of the deck to match the front of the pilot beam.  I drilled holes in the deck to accommodate the original Bachmann uncoupling lever from the stock pilot. 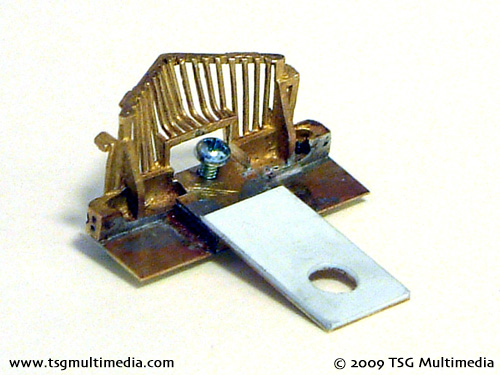 When I test-fit the pilot to the locomotive, it was a little loose, so I used a plastic shim to thicken the mounting tongue.  I drilled and tapped a hole for the front coupler.

I added some other details like SP-style numberboards near the smokestack.  I also made some modifications, cleaning up the cab roof and removing the original bell on top of the boiler in favor of a new bell casting on the front of the locomotive.  Removing the original headlight left a hole in the smoke box front, so I filled that and repainted it.  I also cleaned up the mold seam on the top of the boiler and touched up the paint there.

I’ve found that Bachmann steamers can vary in running qualities, but this one ran pretty well on DC before I started modifying it.  Since most of what I did was cosmetic, it didn’t affect the operation of the locomotive.

The Spectrum 2-8-0 is not as detailed as some of the newer Bachmann Spectrum offerings, but it’s still a nice-looking locomotive of a very common wheel arrangement.

The Soundtraxx Tsunami delivers outstanding sound quality and great lighting effects.  There are myriad options to tweak the sounds.  The Tsunami has more sound-related CVs than any other sound decoder I’ve encountered.

Unlike some other sound decoders, the Tsunami is not reprogrammable.  It does come with several alternate whistles that can be changed by setting a CV.  I do like the fact that Soundtraxx made all of the features of the Tsunami configurable through CV programming, so you don’t need a computer and proprietary hardware to get the most out of the decoder.

Unfortunately the motor control doesn’t measure up to the high standard set by the audio.  Despite many hours of tweaking and trying all kinds of different combinations of values for the motor control CVs, I could not get the Tsunami to run the locomotive as well as it ran on DC.  The starting speed was too high and the motion was somewhat jerky.  Frustratingly, I also found that the performance was inconsistent.  For example, I would get the locomotive to run fairly well with one set of CV values, and then the next day it would not run as well.  I’ve never experienced that kind of behavior with any other decoder.

After we’d finished production of the DVD, I went back and cut the motor wires from the Tsunami.  I had an extra Lenz Silver Mini decoder on hand, and I soldered that in just to run the motor.  The Tsunami remains in control of the lights and sound.  Both decoders support decoder lock, so they can still be programmed independently.

The improvement was amazing.  The Lenz does a great job running the engine, much better than the Tsunami and it’s easier to set up, requiring very little CV tweaking.  The locomotive makes very smooth, slow starts and stops and runs down the track at a consistent speed without any jerkiness.  All of the Tsunami sounds still work normally and so far I haven’t noticed any adverse effects as a result of having the Tsunami disconnected from the motor.