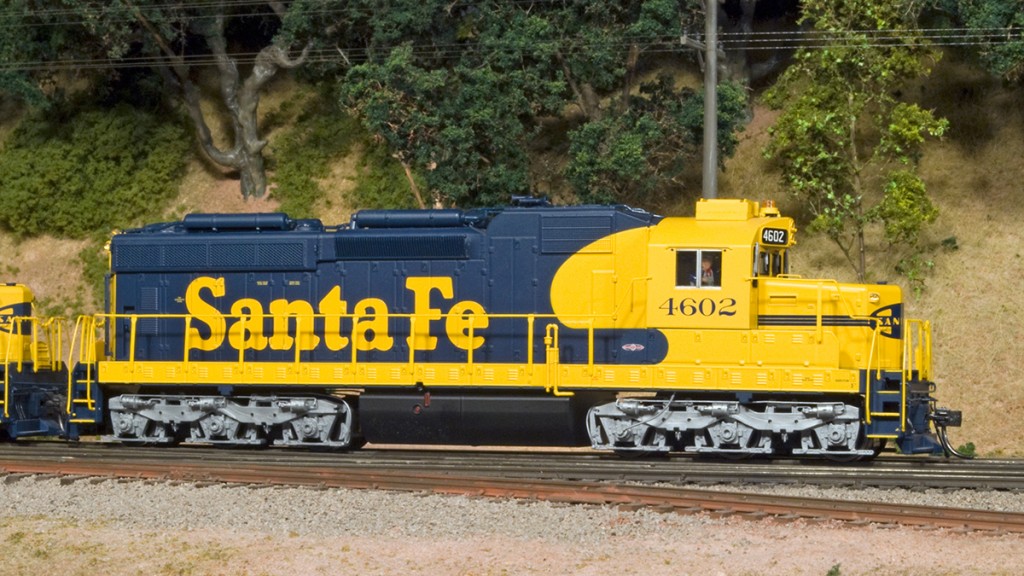 Santa Fe’s SD26s were rebuilt by the railroad from SD24s, and were off the roster by the mid 1980s.  As such they’re a little before my early 1990s era, but I like them and when Atlas brought out their excellent models I had to add some to my roster.

Atlas’s SD24s and SD26s were available with QSI DCC sound or without a decoder.  No. 4602 is one of the latter, though it did have a sound-ready frame.

On the DVD I show how I installed a Diesel Tsunami into this locomotive using one of the factory speaker mounts and added a working beacon.

No. 4602, along with sisters 4622 and 4644, are featured in a three-way comparison later on the DVD.  No. 4622 is equipped with a QSI Quantum factory-installed sound decoder with the version 7 upgrade, and No. 4644 has an ESU LokSound 3.5.  Since the mechanisms are identical, any differences in sound and performance can be attributed to the decoders.

This is a very nice, smooth running model.  I have to applaud Atlas for being willing to make a locomotive that was unique to the Santa Fe.  Eventually I want to change some details to make the locomotive appear as it would have toward the end of its service life, and add some weathering.

The Soundtraxx Tsunami delivers outstanding sound quality and great lighting effects.  There are myriad options to tweak the sounds.  The Tsunami has more sound-related CVs than any other sound decoder I’ve encountered.

Unlike some other sound decoders, the Tsunami is not reprogrammable.  It does come with several alternate horns that can be changed by setting a CV.  I do like the fact that Soundtraxx made all of the features of the Tsunami configurable through CV programming, so you don’t need a computer and proprietary hardware to get the most out of the decoder.

I have to say that Soundtraxx really did a good job with the EMD sounds, and the “notching” effect is superb.  These are the best diesel prime mover sound effects that I’ve heard.  I did not like the horn as well, and it is not very loud, but that may be partly due to my choice of speaker.

Unfortunately the motor control doesn’t measure up to the high standard set by the audio.  Despite many hours of tweaking and trying all kinds of different combinations of values for the motor control CVs, I was not able to get this locomotive to run as smoothly as its excellent mechanism is capable of.  The values I eventually settled on seemed to produce the best performance.  Probably because this is an Atlas diesel, it runs smoother than any of my other Tsunami installs thus far, but still won’t maintain a steady speed going down the track.

There are always subtle oscillations in the speed of the locomotive if BEMF is turned on, producing an “inchworm” effect.  I’ve found that this can be reduced with tweaking but not eliminated.  Other decoder brands do not do this.