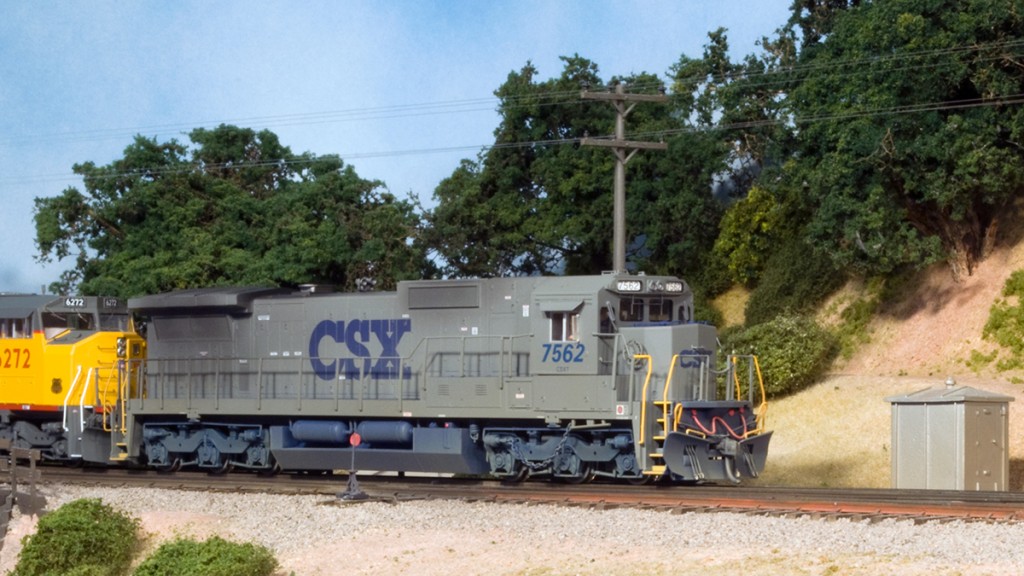 The Atlas C40-8 is a popular model of a common locomotive.  Though like many Atlas offerings these were available with QSI sound already installed, I’m sure I’m not the only one who bought a non-sound unit and decided later that I wanted sound in it.  Many of Atlas’s non-sound units like this one have sound-ready frames, making the job of installing a sound decoder a little easier.

Since this install was similar to others on the DVD, I focused on how I adapted one of the factory 30mm speaker mounts to fit a LokSound 28mm speaker.

Only common CVs or those that were changed from their default values are listed.  Some settings reflect my personal preferences for speed matching and performance.  The LokSound 3.5 has an outstanding BEMF implementation, and I left most of the BEMF-related CVs at their defaults.

This locomotive looks good and like most modern Atlas units, runs smoothly and quietly.  Even though I mostly model the Southern Pacific and Santa Fe, I like these early CSX all-gray units.  Having a couple of units from distant railroads adds variety to a diesel consist, is a good excuse to model something a little different, and on a modern railroad is completely plausible!

This was a factory-painted but unnumbered unit that I finished using Microscale decals.  One thing I hadn’t considered when choosing a number for this unit was that at the time I had a Cotton Belt unit numbered 7652, which can be confusing.  If I have a dyslexic moment I can sometimes dial up the wrong locomotive on the DCC controller!  The Cotton Belt engine is one I intend to redo, so when it comes out of the shop it will likely have a new number.

The sound quality of the LokSound 3.5 is largely dependent on the sound set that’s programmed into the decoder’s memory.  Unfortunately the GE 7FDL-16 is not one of their better sound sets.  If I ever have the chance to reprogram the decoder I might substitute the 7FDL-12 sound set, which sounds much better (even if it’s not really correct).  The five-chime horn sounds good, though.