The Atlas B40-8W (or Dash 8-40B if you prefer) is an example of a modern locomotive model that runs very well is fairly well detailed right out of the box.  Even though I mostly model the 1990s, I was especially interested  in BNSF 557 because I had the chance to photograph the full-sized locomotive in 2008.  I wanted to reproduce the engine as it looked on that day.  Lucky for me, this was one of the road numbers that Atlas produced in the BNSF warbonnet scheme. 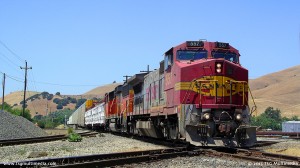 The above photo was taken in 2008 at Niles (Fremont), California in 2008 during the filming of A Day at Niles.

Even though the B40-8W model has pretty good detail right out of the box, I thought there was room for improvement.  Modifications included replacing the snowplow, horn, windshield wipers and sunshades with better aftermarket parts, reworking the lighting with LEDs so that all the lights can be independently controlled (number boards are independent of headlight function, etc.), repainting the air conditioner into BNSF green and orange as per the prototype, adding Kadee “scale” couplers, and more.  I added Microscale reflector decals to the sill and weathered the locomotive per prototype photos.  I installed an ESU LokSound Select 6-function DCC sound decoder to control everything.